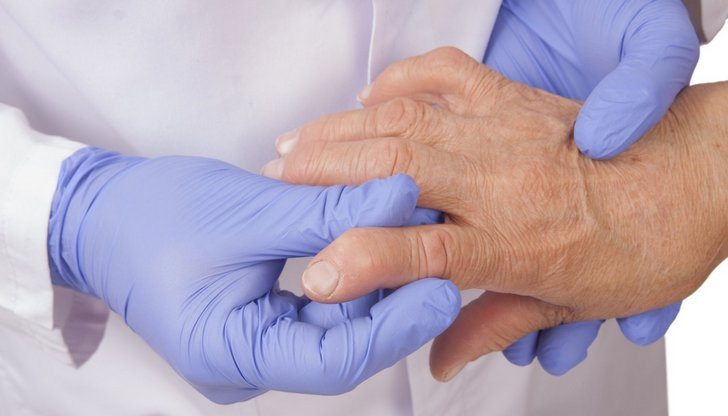 Rheumatoid arthritis is a systemic pathology of connective tissues with autoimmune pathogenesis and an unclear etiology, mainly affecting small joints by the type of erosive-destructive polyarthritis. In the clinical picture of the disease, there are both articular and extraarticular signs. For rheumatoid arthritis, symmetrical involvement of the joints in the pathological process is characteristic, leading to their pronounced deformation. The disease is manifested by serositis, the formation of subcutaneous nodules, lymphadenopathies, vasculitis. 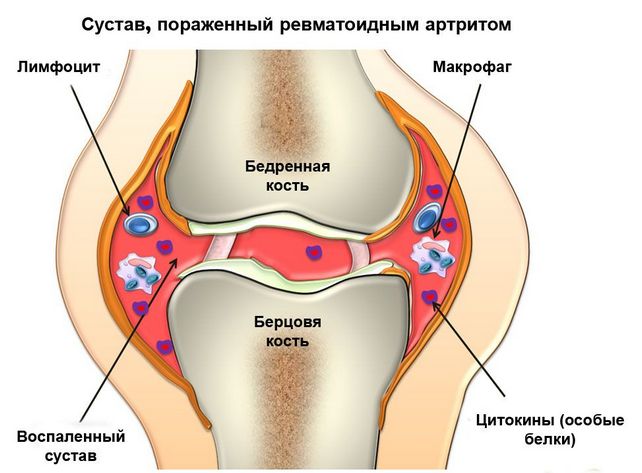 To diagnose rheumatoid arthritis, instrumental and biochemical studies are performed. Radiography is the most informative, the results of which make it possible to assess the degree of damage to connective tissue and bone structures. Conservative treatment consists in a long course of taking drugs of various clinical and pharmacological groups. With the progression of pathology, surgical restoration of the joints is required.

Most often, the disease is diagnosed in women who are in natural menopause. But juvenile rheumatoid arthritis is detected in children of different ages. Studies of etiological aspects made it possible to establish a relationship between the development of pathology and a genetic predisposition to disruption of the immune system when exposed to certain negative factors. The likelihood of inflammation of the joint structures increases significantly in the presence of defects of immunoresistance. Histocompatibility antigens are responsible for changing the immune response to the introduction of infectious agents into the body. Most often, the impetus for the development of autoimmune pathology is penetration:

After the introduction of infectious agents, the formation of circulating immune complexes containing immunoglobulins G, M begins. With blood, they enter the synovial bags and come into contact with their membranes, causing the destruction of the cartilage cells of the elbow, knee, and shoulder joints. Lysosomal enzymes are released from neutrophils, which causes the development of synovitis – an inflammatory process accompanied by an accumulation of fluid (effusion) in the joint cavity. Cartilage damage occurs due to the formation of granulation tissue on the synovial membrane. As rheumatoid arthritis progresses, immune complexes penetrate the internal organs, which explains the gradual decrease in their functional activity. If the inferiority of enzyme systems is inherited, then the risk of rheumatic process is quite high. Violations of the metabolism of tyrosine, tryptophan and other amino acids are especially dangerous.

At the next stage of pathology, specific rheumatoid granulomas are formed, provoking numerous joint erosion. Bone tissue is exposed, and then ankylosis, osteoporosis, bursitis, tendonitis begin to manifest clinically. The defeat of the parenchymal organs leads to the appearance of the articular-visceral form of rheumatoid arthritis.

The development of the disease predisposes a person to the presence of infectious or reactive arthritis, endocrine and metabolic disorders, inflammatory and degenerative dystrophic joint pathologies, pregnancy, frequent stresses, depressive states, work with toxic chemical compounds: 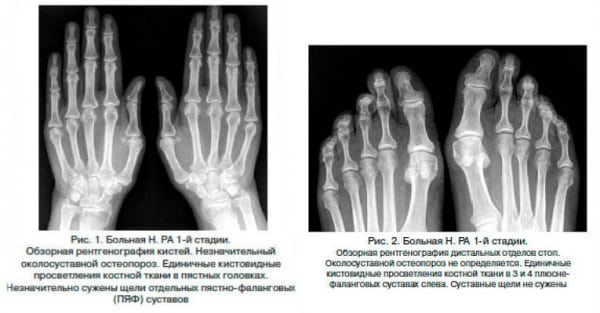 Three forms of flow are characteristic of rheumatoid arthritis. Pathology may practically not progress or involvement in the pathological process of joints and internal organs is slow. The most dangerous is a rapidly progressing form in which the disability of a person is significantly accelerated. Rheumatologists also classify rheumatoid arthritis depending on the degree of activity of clinical and morphological changes. With minimal activity, the disease usually manifests itself only with articular signs. For medium and high degrees, intraarticular symptoms are also characteristic.

The leading clinical manifestation of rheumatoid arthritis is articular syndrome. The most commonly diagnosed bilateral lesions of the joints. The patient complains of periodic pain in the muscles of the joints, fatigue, morning stiffness, usually disappearing within an hour. A psychopathological disorder gradually develops, expressed in fatigue, weakness, and drowsiness. Sweating increases, body temperature rises to subfebrile values ​​(in the range of 37,1–38,0 ° C). Usually rheumatoid arthritis makes its debut when the seasons change, after entering a certain physiological period (menopause, puberty, postpartum). The provoking factors are injuries, hypothermia, respiratory, gastrointestinal, urogenital infections.

If the pathology makes its debut acutely or subacutely, then the clinical picture is supplemented by a febrile state, expressed by myalgia and arthralgia. With slow progression of rheumatoid arthritis, the intensity of the symptoms does not change much, as does the functional activity of the joints, which are gradually involved in the pathological process:

Even the “neglected” ARTHRITIS can be cured at home! Just remember to smear it once a day. 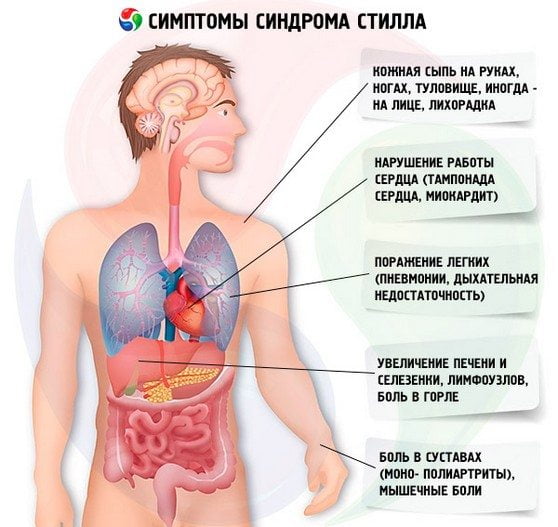 Less commonly, damage to the temporomandibular joints is detected. Pathological exudate accumulates inside the joints, they swell, painful on palpation. Movements are limited, the skin turns red, it becomes hot to the touch due to overfilling of blood vessels. Infection with the inflammatory process of the vaginal tendons provokes the development of tunnel syndrome as a result of compression of the median nerve. In this case, the sensitivity, mobility of the fingers decreases, and the resulting pain radiates even to the forearm. Pathology can proceed according to the type of Steel’s disease, accompanied by osteoarthritis, Felty’s syndrome, polyarthritis.

Systemic signs are more pronounced with a seropositive (presence of rheumatoid factor in the blood) form of pathology. Skeletal muscles are always involved in the inflammatory process – interosseous muscles, extensors of the forearm, straight femoral and gluteal muscles. Marked atrophy is observed, muscle strength, tone are reduced. The skin becomes dry, the epidermis becomes thinner, hemorrhages in soft tissues and subcutaneous tissue become more frequent. Gangrene of the distal phalanges occurs as a result of the formation of small necrotic foci in the subungual region. 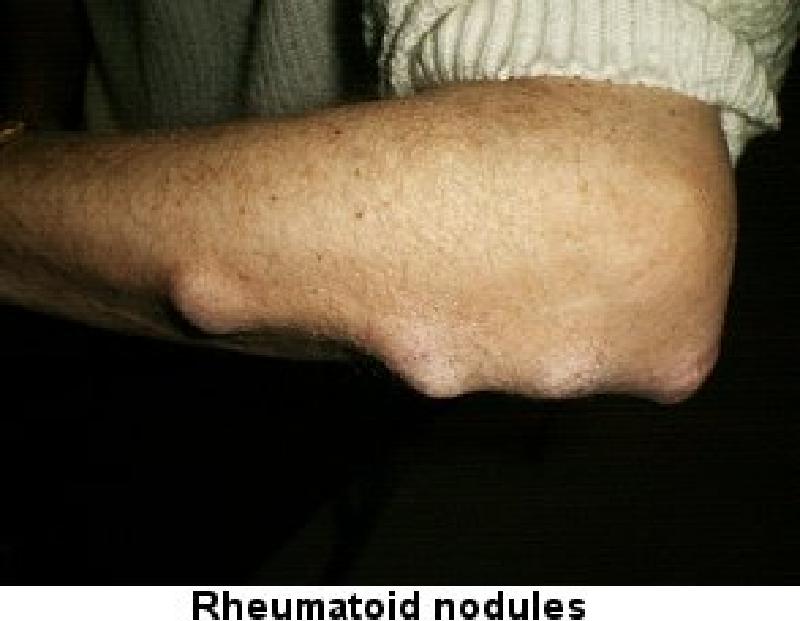 A specific extra-articular manifestation of the disease is the formation of subcutaneous connective tissue nodules of 5-20 mm in size. They are dense, roundish, mobile, multiple or single, painless on palpation. The location of the nodules is symmetrical or asymmetrical on the forearms and in the occipital region. Formations are often found in the myocardium, lungs, heart valves. The formation of nodules indicates a rheumatic attack, and their resorption indicates the achievement of a stable remission. Rheumatoid arthritis is characterized by extremely severe damage to internal organs:

The presence of an inflammatory process in the body can be established even by the results of a general blood test. With rheumatoid arthritis, it increases the number of leukocytes (more than 9 * 109 / l) produced by the immune system against the background of a slight decrease in red blood cells. The erythrocyte sedimentation rate increases – 15 mm / s. But the most informative biochemical blood tests:

Using a puncture, a joint fluid is taken to examine its composition. At an early stage in the development of pathology, ultrasound is informative, which makes it possible to identify even minor destructive changes in connective tissue structures. An x-ray examination is mandatory. On the images obtained, the signs of osteoporosis (decrease in bone mass), erosion, and fusion of joint spaces are clearly visualized. Radiography helps to differentiate rheumatoid arthritis from gout, osteoarthritis, arthrosis, infectious inflammation of the joints. In diagnostics, densitometry, scintigraphy, arthroscopy, biopsy of subcutaneous formations can be used.

Rheumatoid arthritis is not yet a definitive cure, so all the efforts of doctors are aimed at eliminating symptoms, preventing the spread of the inflammatory process to healthy joints and internal organs. The diet for rheumatoid arthritis has no therapeutic value, but its adherence allows to reduce weight in obese patients. To reduce the load on the joints, it is recommended to wear orthopedic devices – orthoses, corsets, bandages. Drug treatment is carried out using the following means:

Therapeutic ointments for arthritis and arthrosis