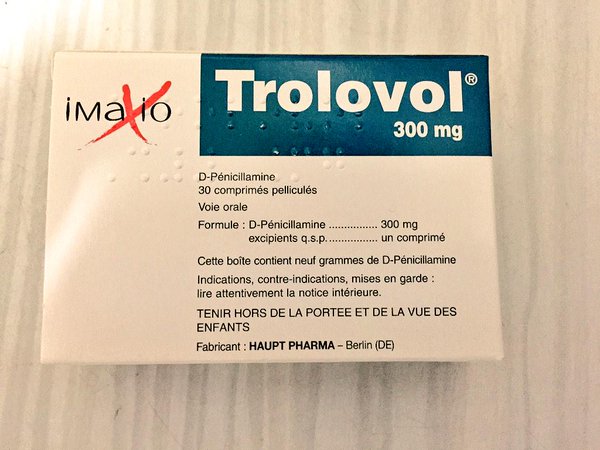 These pills for rheumatoid arthritis are used to reduce the aggression of the immune system to the cells of the synovial membrane, articular bag, hyaline and fibrous cartilage. Penicillamines inhibit T-lymphocytes, inhibit neutrophil chemotaxis and the release of enzymes from lysosomes. Drugs enhance macrophage activity, inhibit collagen biosynthesis. In the treatment of rheumatoid arthritis, the ability of penicillamines to reduce the level of pathological macroglobulins, including rheumatoid factor, is especially in demand.

Medicines for rheumatoid arthritis (Trolovol, Distamine, D-Penicillamine) are effective, but very toxic. Therefore, they are included in therapeutic regimens, if the use of safer drugs has failed.

With the ineffectiveness of non-steroid drugs and glucocorticosteroids, biological drugs are recommended for patients with rheumatoid arthritis of the joints. Their course intake allows you to inhibit specific proteins involved in the development of an acute or chronic inflammatory process under the influence of the immune system. Immediately after the diagnosis is made, therapy is carried out by the following means:

Such drugs rarely provoke the development of adverse reactions, do not disrupt the work of internal organs. Their only drawback is the very high cost (from 10000 and above). Such a price is due to the use of the latest technologies and substances of a high degree of purification in their production.

The latest generation of drugs against severe autoimmune pathology is a drug that can selectively suppress the activity of biologically active substances that cause inflammation. After their use, interleukins, a tumor necrosis factor, are inhibited. The treatment of rheumatoid arthritis with the help of new generation drugs is very effective. This is confirmed by the results of not only pharmacological, but also clinical studies. In rheumatology, the use of such means is practiced:

Another advantage of these drugs for rheumatoid arthritis is the almost complete absence of adverse reactions, including local ones. But they are not widespread because of the cost in excess of 40000 rubles.

During relapses, glucocorticosteroids are considered the best cures for rheumatoid arthritis. With exacerbations, severe pain arises that cannot be eliminated even by parenteral administration of NSAIDs. In such cases, synthetic analogs of hormones produced by the adrenal cortex are included in therapeutic regimens:

They are used in the form of injections from rheumatoid arthritis. Injections are usually performed intramuscularly, directly into the joint cavity or adjacent periarticular tissues. Glucocorticosteroids eliminate pain and relieve inflammation for several days, and sometimes weeks, especially when combined with anesthetics Lidocaine or Novocaine.

A significant drawback of hormonal drugs in rheumatoid arthritis is the numerous side effects. They are toxic, can damage the tissues of the liver, kidneys, gastrointestinal tract. In autoimmune pathologies, destruction of bone articular structures by glucocorticosteroids is especially dangerous.

Non-steroid drugs usually act as painkillers for rheumatoid arthritis. But the spectrum of their use is limited due to the damaging effects on the digestive system. Therefore, doctors with mild to moderate pain include analgesics in the therapeutic regimen without narcotic components:

Patients may be prescribed antispasmodics, for example, Spazmalgon, Trigan, Maxigan. These drugs in the form of injections and tablets for rheumatoid arthritis are not used for exacerbations, but at the remission stage to eliminate weak, aching, pulling painful sensations. They occur during hypothermia, a sharp change in weather, physical activity.

In modern rheumatology, such drugs are rarely used. They are prescribed to patients in the presence of contraindications to receive more effective cytostatics. In the treatment of autoimmune disease, Auranofin and Aurothiomalate have proven themselves well. The active ingredients of the agents prevent penetration into the inflammatory foci of macrophages and leukocytes, slow down cell division. Gold preparations for rheumatoid arthritis are intended for long term use for several months or years.

In the treatment of rheumatoid arthritis, drugs are used that reduce the severity of symptoms and prevent their onset. Pathology is not yet amenable to final cure, including due to the lack of data on the causes of its development. But a well-designed therapeutic regimen will achieve a stable remission.