It is curious that gout on the legs is usually manifested by acute arthritis of the metacarpophalangeal joint of the big toe. Most often the inhabitants of developed countries suffer from it. The peak incidence in men is 35-50 years old, in women – 55-70 years old. The low incidence in young women can be explained by the influence of estrogen on the excretion of urate by the kidneys. With the onset of menopause, the hormonal background of women changes, and the level of uric acid (MK) approaches that of men. 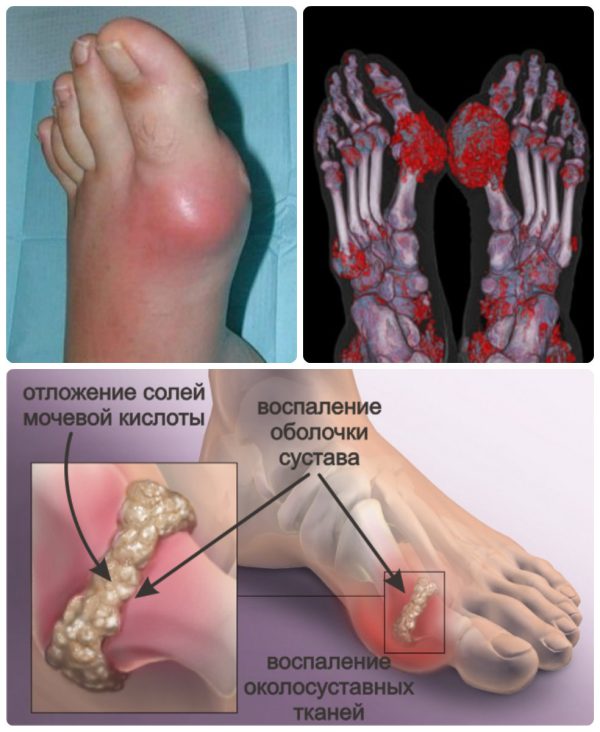 According to statistics, gout is detected in 0,06-3% of the adult population of different countries. Men suffer from pathology 20 times more often than women. The incidence of asymptomatic hyperuricemia is 2-5% in the United States, 7% in Spain, 17% in France and 19,3% in Russia. Especially often, a high level of MK in the blood is detected in residents of New Zealand, the Philippines, and the islands of the Pacific Ocean. In these regions, the prevalence of hyperuricemia is 60%.

An attack of gouty arthritis is one of the most painful among all diseases of the musculoskeletal system. It seems to the patients themselves that their leg is “trapped in a trap” or “a dog is chewing on it”.

Where does the disease come from

The appearance of typical manifestations of gout on the legs is preceded by serious metabolic disorders. Initially, a person’s level of MK in the blood rises, and a large amount of urate accumulates in the body. Against the background of hyperuricemia, needle-like crystals of sodium monourate (MUN) are deposited in articular cartilage, ligaments, tendons, auricles and even internal organs. 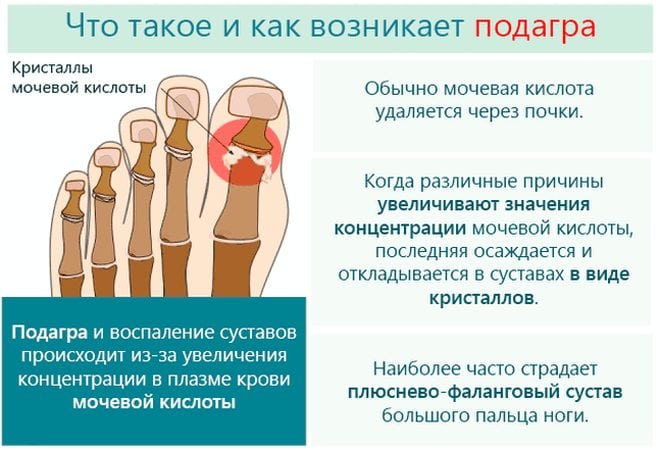 Exacerbation of gout on the leg can trigger alcohol consumption, trauma, hypothermia, a visit to a bath or sauna. The first attack occurs several years after the development of asymptomatic hyperuricemia. Over time, seizures occur more often. Especially unfavorable gout occurs in people younger than 30 years old.

According to the development mechanism, three forms of purine metabolism are distinguished:

Persistent hyperuricemia can occur in patients who take diuretics for a long time. Pathology develops even in young women trying to use these drugs for weight loss.

Signs of gout on the legs

In 50-80% of cases, an acute attack of gout occurs against the background of complete health, for no apparent reason. Most often, unpleasant symptoms appear at night or early in the morning. Metatarsophalangeal joints of the foot are usually involved in the pathology.

Symptoms of an acute attack of gout: 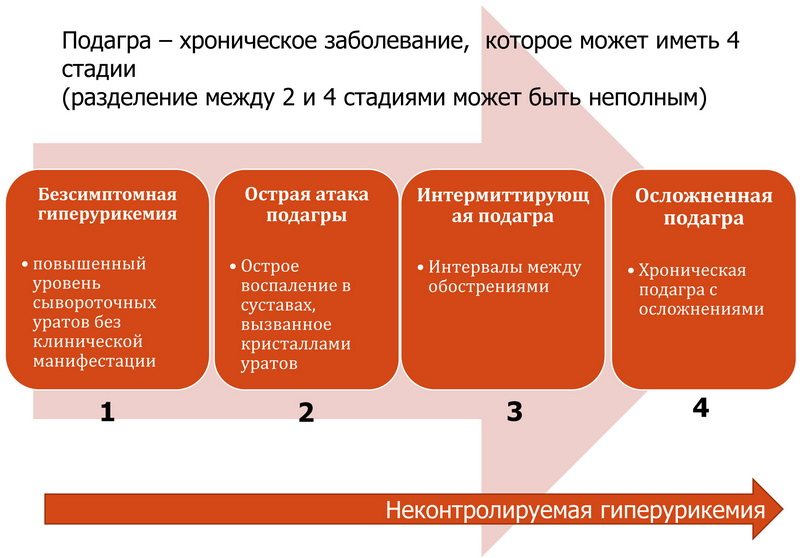 The first attack lasts from three to ten days and usually goes away spontaneously, even if untreated. After him comes remission – for several months or even years. Over time, exacerbations occur more often, and the disease gradually becomes chronic. In advanced cases, the body is covered with gouty tofuses – cones or nodules containing uric acid salts.

In many people, the skin over the tofus is thinning, which leads to the formation of fistulas. Of these, content spontaneously stands out in the form of a white pasty mass.

Table 1. The stages of development of pathology

Asymptomatic GUIt proceeds without any manifestations. It is possible to identify only with the help of laboratory research methods. An elevated uric acid level is found in the blood of patientsAcute gouty arthritisA distinctive feature is a spontaneous onset and the same sudden disappearance of all symptoms. After periods of remission, acute attacks develop over and over again.Interictal goutIn the period between attacks, a person feels relatively well. However, each new exacerbation is becoming increasingly difficult. Each time, the periarticular tissues become inflamed more and more, and new joints are involved in the pathology.Chronic gouty arthritisIt develops after several attacks of acute gouty arthritis. The patient appears stiff joints, sometimes there are contractures and deformities. Ankyloses are rareChronic Tofus GoutIt occurs no less than 5 years after the first attack. Many tofuses appear on the patient’s body. They are localized in the joints, on the extensor surfaces of the elbows, auricles, and cartilaginous partitions of the nose.

Diagnosis of the disease

It is easy to identify acute gouty arthritis by the characteristic symptoms of the disease. However, before treating gout on the legs, you still need to confirm the diagnosis.

Criteria of the American College of Rheumatology recommended by the WHO:

During an acute attack, the level of MK in the blood is within normal limits. This can confuse doctors and even make diagnosis difficult. Therefore, the identification of EOR crystals in the synovial fluid and the presence of proven tofuses play a crucial diagnostic value.

During the study of intraarticular fluid, doctors identify signs of inflammation. To distinguish infectious arthritis from gouty, bacteriological examination is necessary. For this, synovial fluid is sown and the growth of pathogenic microflora is observed. Lack of bacteria suggests gouty arthritis.

A reliable method for diagnosing gout is polarization microscopy. With its help, yellow crystals and needle-shaped crystals located extra- and intracellular are detected.

How to treat gout on the legs

Treatment of gout on the legs varies during periods of exacerbation and remission. If in the first case, anti-inflammatory therapy is important, then in the second case, nutritional correction and taking drugs that affect uric acid metabolism. As for asymptomatic hyperuricemia, there is still no generally accepted opinion on the advisability of its treatment.

According to the recommendations of the European Anti-Rheumatic League (EULAR), indications for a decrease in uric acid levels in the blood: 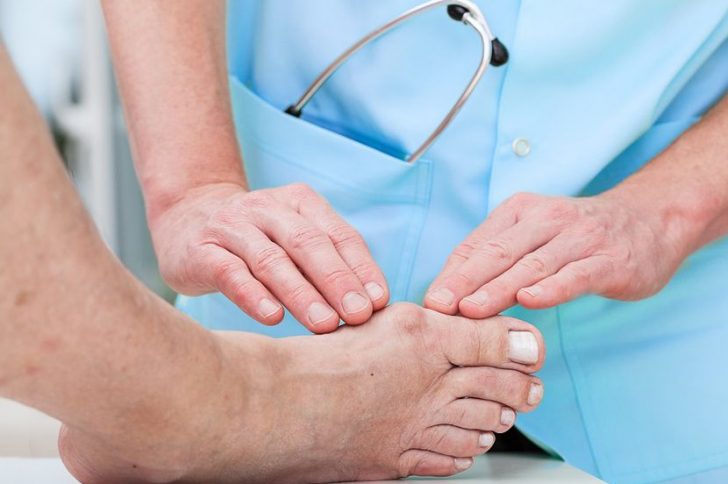 Good nutrition helps to reduce hyperuricemia and significantly facilitates the course of gout. Doctors prescribe diet No. 6 to all patients with this pathology. It eliminates purine-rich foods and limits sodium and animal fats. Along with this, a person receives a sufficient amount of vitamins. Proper nutrition is an important part of treatment for gout on the legs.

It should be completely excluded from the diet: 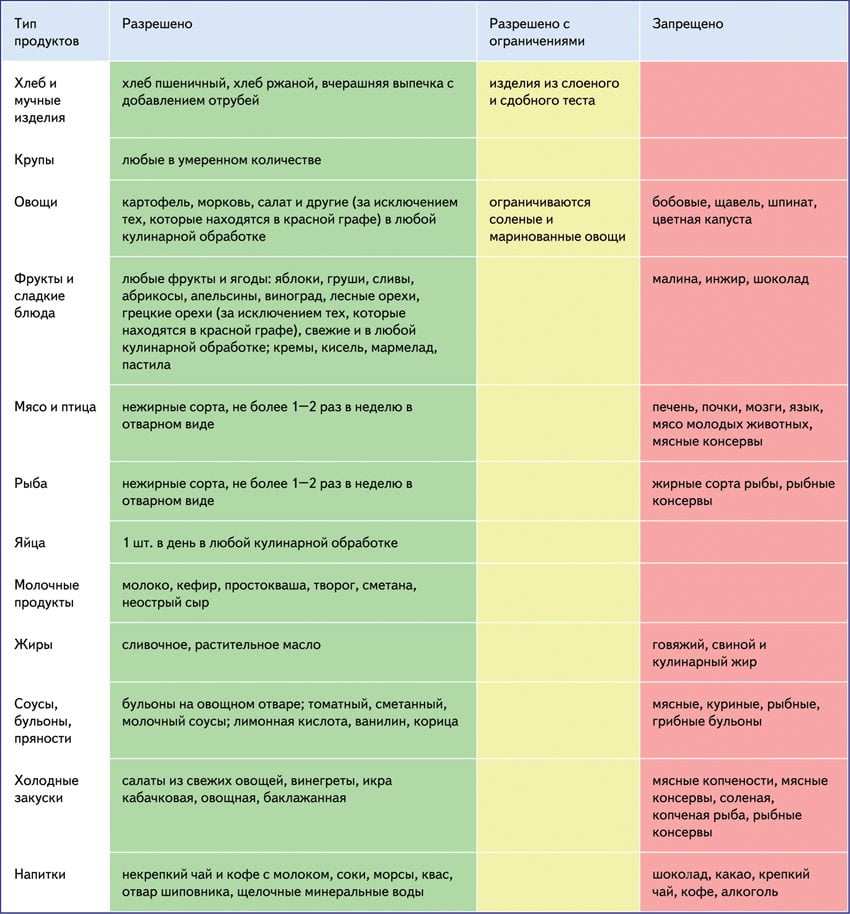 With gout, it is also necessary to limit the consumption of all types of meat, broths, fish and crustaceans (shrimp, crabs, lobsters). Patients need to eat less mushrooms, lentils, beans and spinach. Boiled meat and fish can be in small quantities (200-300 grams) and not more often 2-3 times a week.

Approximately 60% of patients who have suffered an attack of gout, a relapse occurs within 12 months. To prevent it in the interictal period, one should switch to dietary nutrition.

For faster elimination of uric acid from the body, diuresis must be stimulated. For this purpose, it is recommended to drink at least 1,5 liters of fluid per day. Very useful teas, fruit drinks, juices and alkaline mineral waters. The latter alkalize urine, further stimulating the excretion of MK.

Proper nutrition reduces the frequency and severity of attacks, but does not cure the disease. Therefore, in addition to diet, a person also needs basic drug therapy.

Drugs that regulate the level of MK in the blood

How to cure gout on the legs with medications? See a doctor and get tested. After that, the specialist will prescribe the necessary medicines and tell you how to take them. In no case do not self-medicate, as this can lead to unforeseen consequences.

Table 2. Medicines that can be prescribed to treat gout on the legs.

Not sure how to treat gout on your leg? Go to the doctor! Only he can choose the most effective treatment regimen for you. The specialist is better than you versed in the drugs and knows better than you what and how to take.

How to cure an acute attack of gout on the leg

In acute gouty arthritis, doctors prescribe colchicine to their patients. This drug is especially effective in the first 12-24 hours after the onset of unpleasant symptoms. With adequate use of the medicine, the patient notes an improvement in well-being after 6-12 hours. 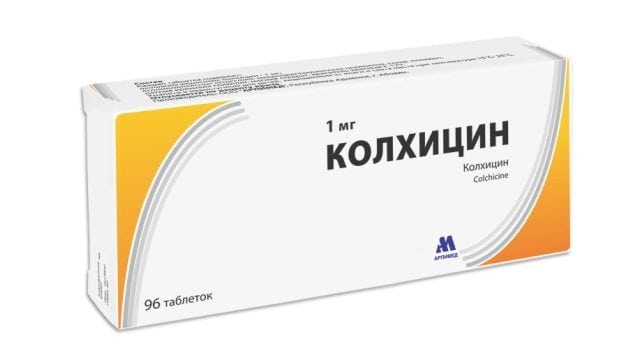 Colchicine can be used in pill form or by intravenous injection. The drug is given to the patient strictly according to the scheme. Taking the medicine on your own, without first consulting a doctor, is prohibited.

How to treat acute pain with gout on the legs? For the relief of pain, high doses of drugs from the NSAID group (Indomethacin, Diclofenac, Nimesulide) are usually used. For severe pain that cannot be relieved by Colchicine and non-steroidal anti-inflammatory drugs, corticosteroid hormones (Methylprednisolone, Kenalog) are prescribed to the patient. Medicines are injected into the synovial cavity of a diseased joint.

How to treat rheumatoid arthritis with modern means