Bone osteoporosis is most often affected by the elderly. According to statistics, 50-85% of women over 65 years of age and almost 100% of people over 85 years of age are affected by it. The disease often develops in people leading a sedentary lifestyle. Among persons engaged in physical labor, it is identified much less often. 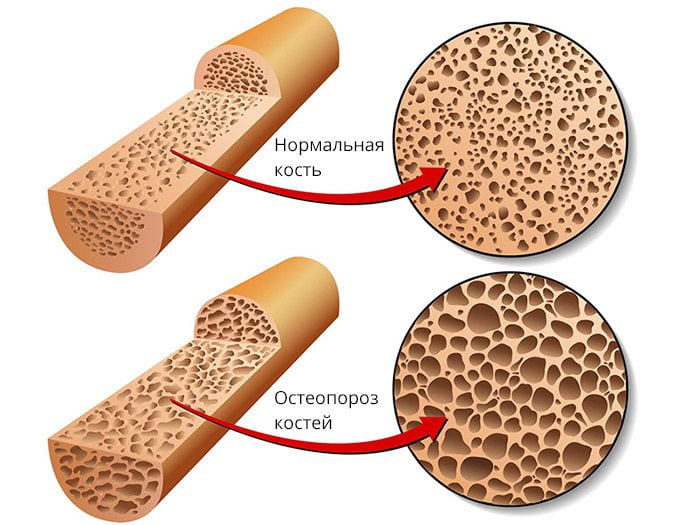 The main cause of osteoporosis is a violation of bone remodeling. Normally, its structure is maintained thanks to the coordinated work of osteoblasts and osteoclasts. The former are responsible for the mineralization of the cancellous bone, the latter are responsible for its destruction. With a normal ratio of these cells in a person, a full renewal of bone tissue occurs. With increasing activity of osteoclasts, bones begin to rapidly lose mineral density (BMD).

Under certain conditions, one osteoclast can destroy the amount of bone tissue synthesized by 100 osteoblasts. To remineralize the lacunae formed by osteoclasts in 10 days, osteoblasts will need 2,5-3 months.

The mechanism of development of osteoporosis

The bones of our body are formed by two types of bone tissue: compact and spongy. The first consists of parallel plates and has a uniform structure. It is very strong and covers the bones outside. 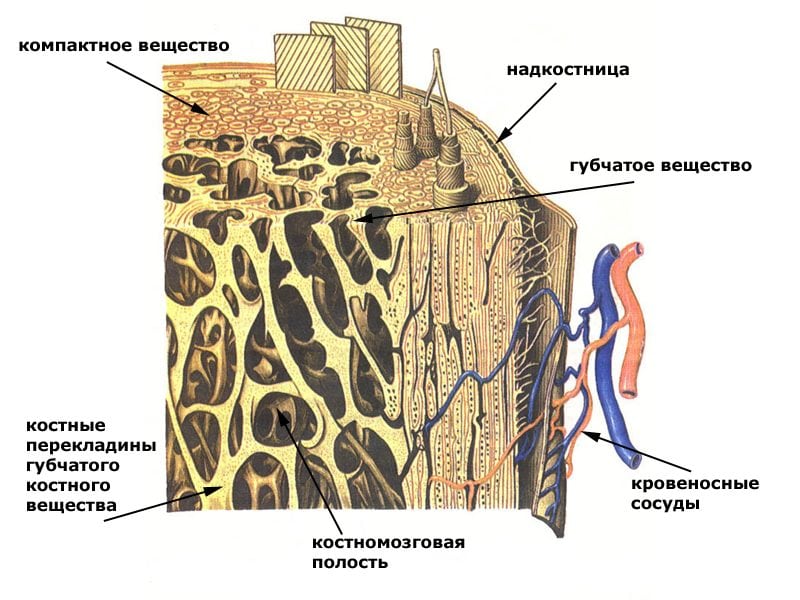 The compact layer is much thicker in the middle parts of the long tubular bones (femur, humerus, greater and peroneal, radial, ulnar). This explains the low frequency of osteoporotic fractures in the area of ​​their diaphysis.

The heads of large, all flat and short bones are covered with a very thin layer of compact substance, under which there is a lot of spongy tissue. The latter consists of plates located at an angle to each other, has a porous structure. It is she who with particular ease loses the IPC.

With osteoporosis, the bone plates become thinner or even die. As a result, the layer of compact substance becomes thinner, and the spongy substance liquefies and loses its density. The bones become very fragile, which is why they break easily.

Doctors attribute osteoporosis to multifactorial diseases. This means that pathology develops under the influence of many provoking factors. Doctors were able to identify the main causes of a progressive decrease in bone density.

Types of osteoporosis depending on the development mechanism:

The disease can develop due to the simultaneous acceleration of bone resorption and a lack of minerals in the body. With age and during menopause, resorptive processes are noticeably accelerated.

It occurs due to the natural aging of the body. The development of pathology contributes to the low motor activity of people in old age. It was previously believed that bone decalcification leads to senile osteoporosis. However, in the course of scientific research it turned out that the disease develops due to osteoclastic resorption caused by inactivity. In humans, trabeculae and the cortical layer become thinner, and bone tissue is replaced by fat.

All bones of the human skeleton need a constant load. It is necessary to maintain their normal structure and prevent bone resorption.

It develops against the background of hormonal changes that occur in women during menopause. It leads to increased loss of calcium by the body and malfunctions in bone remodeling. All this leads to the development of osteoporosis and pathological fractures in the future. 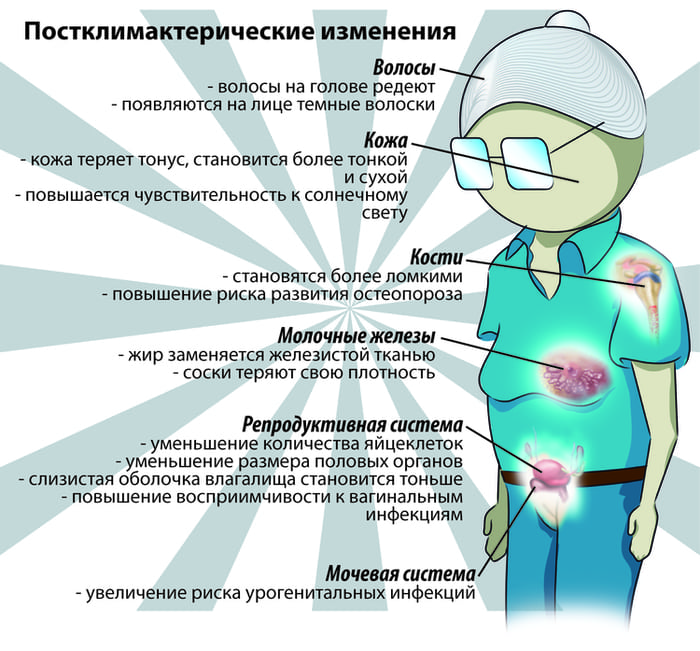 It affects people who are forced to take steroid hormones for a long time. Corticosteroids inhibit the formation of bone tissue by disrupting the differentiation of osteoblasts, negatively affect the bones in many other ways.

The main mechanisms of action of steroids:

In some cases, treatment with corticosteroids is not the primary cause of osteoporosis. Pathology often develops against a background of diseases requiring the use of steroids (collagenoses, bronchial asthma, Crohn’s disease, etc.). Taking medication in this case only further contributes to bone destruction.

In people who abuse alcohol, physiological regeneration and IPC are impaired. The reason is increased excretion of calcium, impaired metabolism of vitamin D. In many patients, an increase in the level of interleukin-6 and antibodies to their own tissues is detected. These substances increase the functional activity of osteoclasts and trigger active resorption processes. 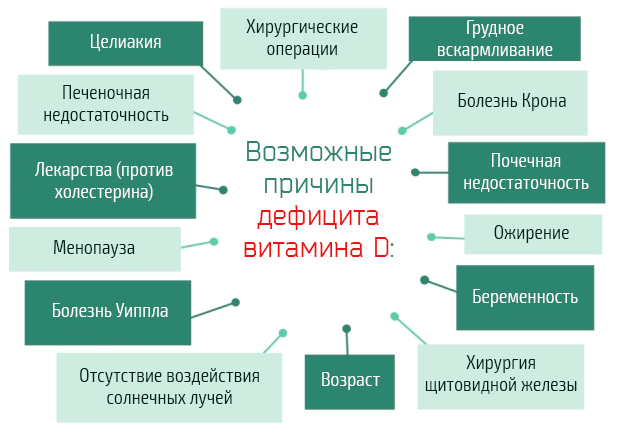 Symptoms of the disease

Osteoporosis has an almost asymptomatic course, which makes it extremely dangerous. In the literature, the disease is called a “silent”, “silent” epidemic. Why is that? 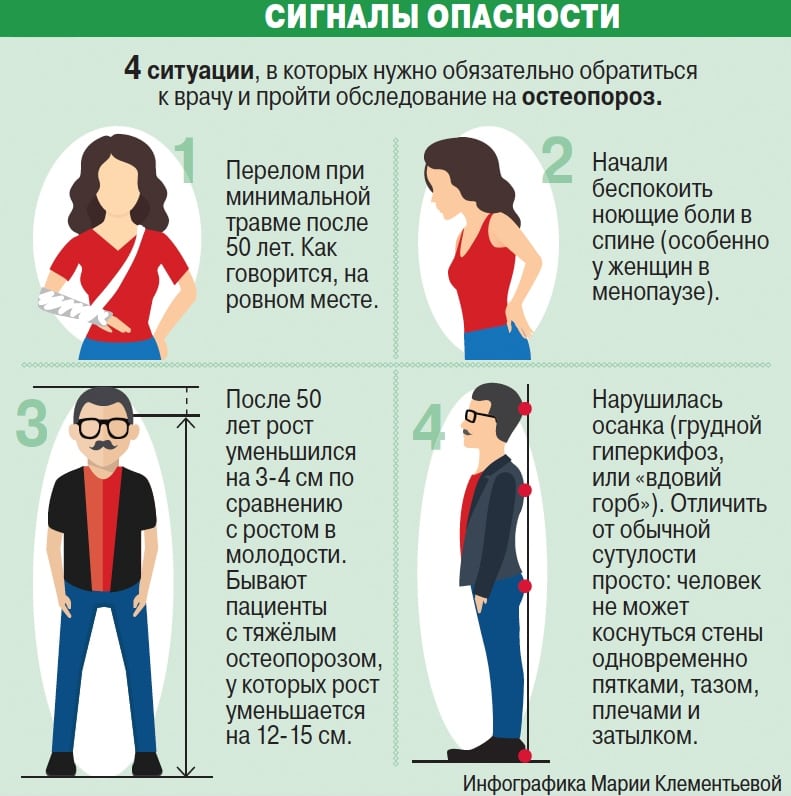 Initially, the disease manifests itself only as increased fatigue and decreased performance. People do not pay attention to these symptoms or do not attach importance to them. In the initial stages of pain in osteoporosis occur in a small number of patients. They are nonspecific, because of which they can be confused with manifestations of arthrosis, osteochondrosis, or other diseases of the skeleton.

The first sign of the disease is often an acute pain syndrome associated with a fracture of the vertebra or a long tubular bone.

Features of bone pain in osteoporosis:

A pronounced pain syndrome usually appears in people suffering from osteoporosis for more than 5-10 years. Together with it, patients have a pronounced spinal deformity. In the later stages, an increase in thoracic kyphosis and lumbar lordosis can be seen even with the naked eye. 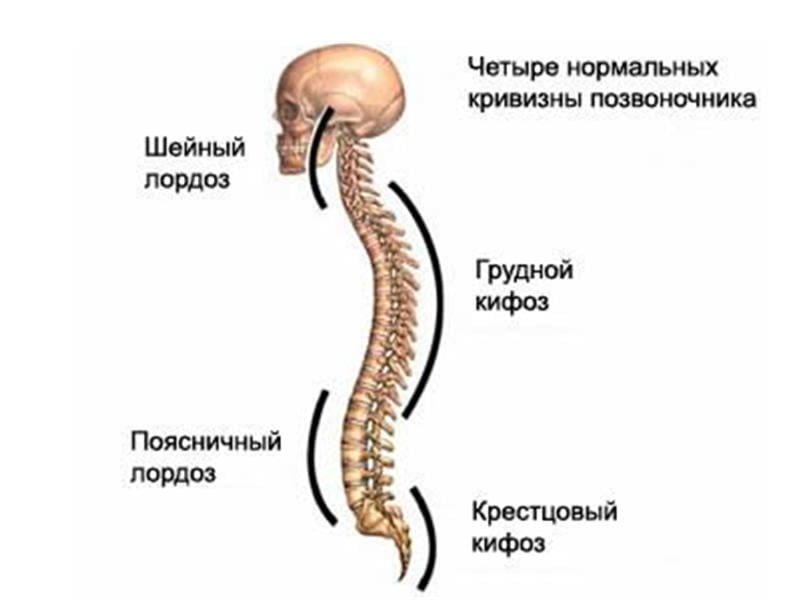 Features of the treatment of wrist joint tendonitis