A degenerative change is a violation of the normal structure of the meniscus, leading to a partial or complete loss of its functions. The cause of the pathology can be injuries, active sports, hard physical work or excessive load on the knee joint. Degenerative processes in menisci can be a consequence of the natural aging of the body. 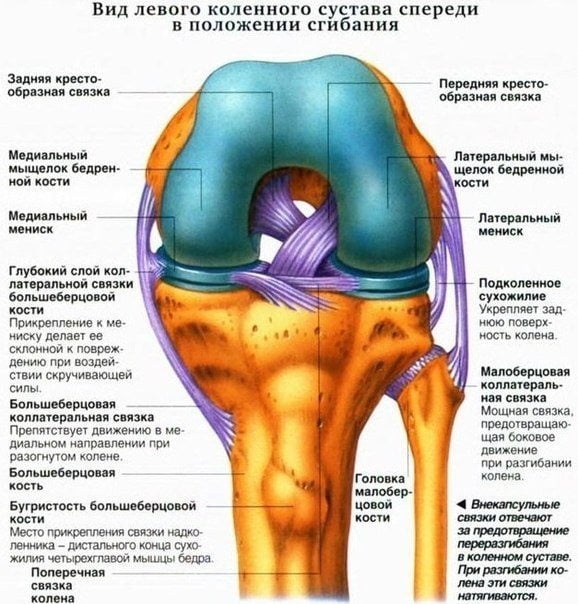 Degenerative changes in the knee joints are a common occurrence among older people, athletes and overweight people. Cartilage, ligaments, menisci, synovial membrane are usually involved in the process. In severe cases, the articular surfaces of the bones that form the knee joint are damaged.

The development of degenerative processes in menisci can be triggered by their frequent trauma, displacement, impaired blood supply and / or nutrition. Most often, the pathology develops against the background of chronic inflammatory and degenerative-destructive diseases of the joints. Also the cause may be traumatic injuries of the knee. 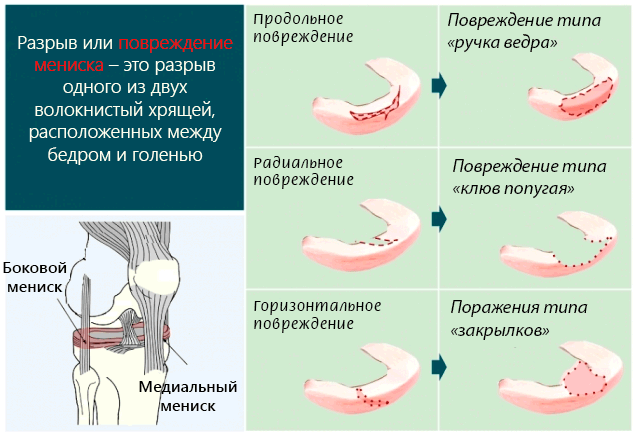 Deforming osteoarthritis is the most common disease of the musculoskeletal system. Pathology develops mainly in people older than 50 years. Among people over the age of 60, it is detected in 97% of cases. Knee joints are affected in 70-80% of patients with osteoarthrosis. 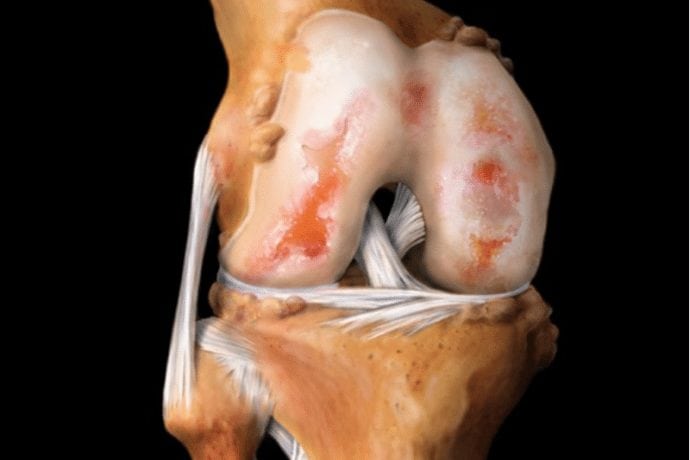 Gonarthrosis is characterized by degenerative-dystrophic changes in almost all structures of the knee joint. Menisci are damaged due to poor blood supply, lack of nutrients in the synovial fluid and constant trauma to dilapidated cartilage.

Factors contributing to the development of gonarthrosis:

Deforming gonarthrosis can lead to permanent disability and disability in just a few years. According to statistics, this happens in 25% of patients within 5 years from the onset of the first symptoms of pathology. Early diagnosis and timely treatment help to avoid undesirable consequences.

Meniscus degeneration is detected in 27% of patients with grade I deforming gonarthrosis. At later stages 2, 3, pathology develops in almost all patients.

Frequent trauma or any damage to the meniscus can lead to the development of degenerative processes in it. A provoking factor can be a sharp movement or an unsuccessful turn with a shin. With injuries, the medial meniscus located on the inside of the joint is most often affected. This is due to the peculiarities of its structure and localization, which do not allow it to avoid pinching of the femur by the condyles. Post-traumatic meniscus degeneration is more common for athletes, hard workers and overly active people. Pathology can be detected at any age.

Do not confuse degeneration with traumatic ruptures, tears, tears, etc. The former are characterized by a long, slowly progressing course with the further development of complications. The latter occur acutely due to injury.

Degeneratively altered menisci break with particular ease. But traumatic injuries themselves often cause degenerative changes. These two pathologies are interconnected and often develop in parallel.

The cause of meniscus dystrophy can be rheumatoid or gouty arthritis, brucellosis, tuberculosis, yersiniosis. The development of pathology can also provoke hypothyroidism, systemic vasculitis and some diseases of the connective tissue (scleroderma, systemic lupus erythematosus, etc.).

Degenerative-dystrophic changes in the meniscus that occur against the background of other diseases are commonly called meniscopathies.

Pathology is differentiated by the localization of foci of degeneration. They can be found both in the body and in the front or rear horns. Most often, degenerative changes are detected in the horn of the medial meniscus. This is due to the peculiarities of its structure and location.

Depending on the severity of pathological changes, 4 stages of degeneration are distinguished. They can only be detected and identified using magnetic resonance imaging (MRI). 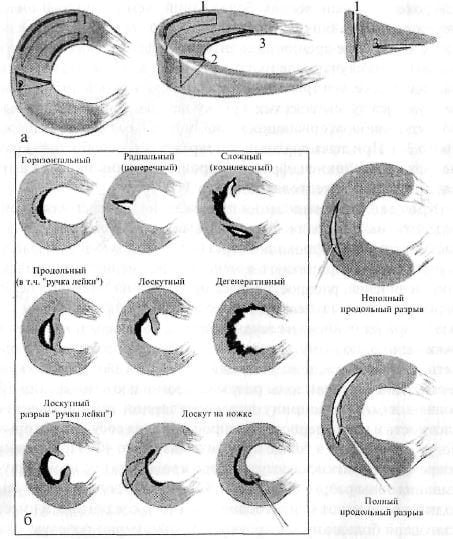 A true meniscus rupture can be said if the III degree of degeneration according to Stoller is revealed.

Table 1. The most common consequences of degenerative changes

Meniscus tears are traumatic and degenerative. The appearance of the latter is usually preceded by aching pain, stiffness and discomfort in the knee for several months or even years.

Menisci are important structures of the knee joint. They play a huge role in balancing the load and ensuring proper knee stability. It is thanks to them that the knee joint can work and function normally. Their degeneration leads to pain, instability and impaired mobility of the lower limb. The knee joint becomes loose, and its functioning is gradually disrupted.

When complications (tears, tears, etc.) occur, a person has pain, discomfort and a feeling of instability in the joint. Unpleasant sensations intensify when descending the stairs and squats. Some patients complain of the appearance of characteristic clicks, a crunch and a feeling of movement of a foreign body in the knee during movements. 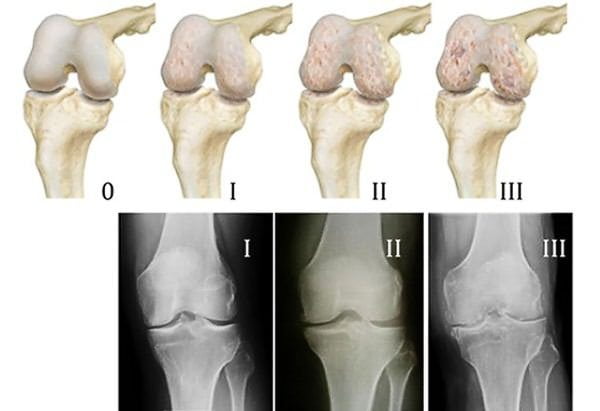 Damage and deformation of the menisci contribute to the appearance of degenerative-dystrophic processes in other structures of the joint. As a result, a person develops deforming osteoarthrosis.

The simplest method for diagnosing pathology is radiography of the knee joints in 2 projections. But it is informative only in the last stages of deforming osteoarthrosis. It is impossible to see degeneration itself in radiographs, but you can only suspect it by the presence of indirect signs.

Modern methods for the diagnosis of degenerative changes in the meniscus of the knee joint:

To slow down the development of degenerative processes, patients are prescribed corticosteroids, chondroprotectors, hyaluronic acid preparations and agents that restore the normal composition of synovial fluid. Most effective is their intra-articular administration. For local injection therapy (LIT), Diprospan, Kenalog, Alflutop, Noltrex, Zell-T and some other drugs are most often used. 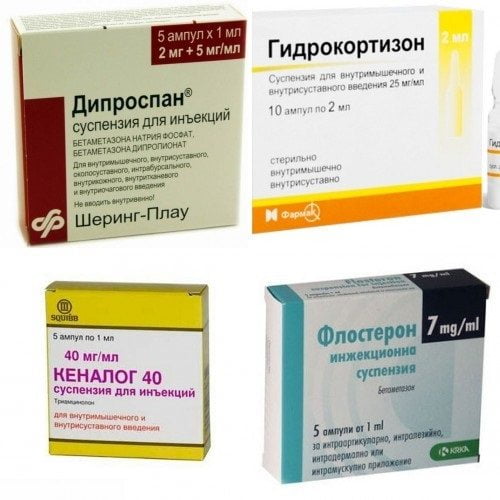 With degenerative changes in the medial or lateral meniscus, accompanied by a rupture, the patient requires surgical intervention. The operation is performed by arthroscopy.

Manifestations in children and adolescents

In childhood, the pathology is most often the result of dysplasia – abnormal formation of the knee joint during fetal development. The baby is born with defects in the structure of bones, cartilage, muscles and ligaments. All this subsequently causes the development of degenerative changes in the menisci.

Unlike adults, in children with injuries, the lateral meniscus is more often damaged. Blockade of the knee joint in childhood and adolescence is rare.

Osteoarthritis of the knee 1 2 degrees