The most common reason for going to the doctor is back pain. Usually, pain indicates the development of a destructive disease in the spine, one of which is thoracic chondrosis. The localization of soreness can be limited to the area of ​​the shoulder blades and chest, and with the running processes spread to the belt of the upper extremities: arms and shoulders. Thoracic chondrosis goes through several stages, each of which informs about the active dynamics of the disease. It is possible to stop the pathological process with the help of complex treatment with drugs, physiotherapy and therapeutic exercises.

Degenerative changes in the intervertebral discs and surrounding tissues underlie the pathological process called chondrosis. The disease is included in the group of pathologies related to the category of dorsopathies. Every third is diagnosed with complaints of pain between the shoulder blades.

Patients are more than forty-five years old, but recently, pathology also affects a younger age. This is due to malnutrition and a sedentary lifestyle.

Dystrophic changes can affect any part of the spine. Thoracic chondrosis is not so often diagnosed. Segments in the chest area are less stressed in everyday life and are mainly used to protect vital internal organs: the heart and lungs.

The disease develops gradually. At the initial stage, degeneration affects the cartilage of the intervertebral discs, causing them to dehydrate. Loss of moisture and insufficient nutrition of the cells entails a change in the structure of the cartilage pad. The disc becomes thin, losing firmness and elasticity. The fibrous membrane loosens, microcracks appear to us.

With the progression of thoracic chondrosis, the gelatinous pulpous nucleus, which is located in the center of the disc, protrudes and forms a protrusion, which degenerates into a hernia of the intervertebral disc. Modifications lead to deformation and violation of the structure of vertebral segments, creating compression on the nerve roots, resulting in not only pain, but also neurological symptoms.

The impetus for the development of chondrosis of the thoracic region can be the factors that accompany a person in everyday life. Performing the usual actions, a person does not think that he himself provokes the development of the disease. Household chores, hypodynamic work, walking with young children, lifting heavy objects, exorbitant loads adversely affect the work of the spine, causing wear on the cartilage.

Why does thoracic chondrosis appear:

Degeneration of the intervertebral disc begins gradually. The first changes are minor, and therefore often do not appear. Initial signs appear when the cartilage is loosened and flattened. At the first stage, a person with chondrosis of the thoracic region may feel unpleasant soreness in the shoulder blades or pressure in the chest. After resting, the symptoms disappear, and the patient may perceive these manifestations as normal fatigue and do not consult a doctor.

Ignoring the problem leads to the active dynamics of the disease and the formation of a characteristic clinical picture. Signs of destructive changes become clearer, and the clinical picture is brighter.

The main manifestations of breast chondrosis: 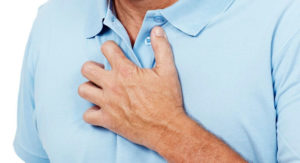 Pain is the main clinical symptom of degeneration of the vertebrae in the chest. With chondrosis of the thoracic region, the pain syndrome varies in nature and duration. Depending on the degree of deformation of the tissues of the vertebral segment, there are two types of pain that have a neurological etiology.

A sudden chest pain radiating to the area between the shoulder blades is called dorsago. Another name for vertebral pain is thoracic lumbago. The symptom got its name from the piercing nature of pain. Dorsago is accompanied by muscle tension and severe soreness when trying to breathe.

“Chest lumbago” occurs after prolonged physical inactivity without a change in posture or when performing work in a forced position, in which there is a strong tension of the back muscle. In its manifestations, dorsago with thoracic chondrosis is very similar to intercostal neuralgia for the localization of pain. Impulses can pass along the ribs to the sternum.

Often, “chest lumbago” differentiate with pain with myocardial infarction. The main distinguishing feature is that the pain does not subside after taking heart preparations, and when reading the electrocardiogram, deviations from the age norm are not observed.

This kind of pain is the exact opposite of dorsago. Thoracic chondrosis is often accompanied by lower dorsalgia. The pain syndrome develops gradually and remains valid for about three weeks. The patient experiences moderate pain in the affected area, which increases with the expansion of the chest (inhalation).

Unpleasant soreness does not subside, but only intensifies at night. After waking up in the morning hours, there is a shortage of air, as well as a significant decrease in the flexibility of the spine. After a simple warm-up or a little physical activity, the pain passes, and a person can bend over or make a turn with the body back.

The destructive process in the spine with chondrosis of the thoracic region takes place in several stages:

A medical specialist should deal with the source of pain in the upper back, to determine that you will not succeed in thoracic chondrosis. After an external examination and listening to the patient’s complaints, the doctor prescribes a radiography. According to the results of an x-ray, bone deformities, the appearance of pathological growths, and the distance between the vertebrae can be detected. All information will help create a preliminary picture and determine the phase of development of dystrophy.

For a detailed study of metamorphosis in cartilage, magnetic resonance imaging is performed. The study shows the condition of the intervertebral disc, the degree of its change. After an objective diagnosis, the doctor confirms the diagnosis and prescribes treatment. 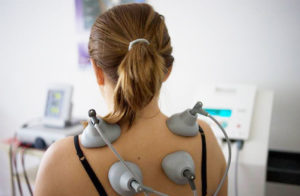 The treatment regimen is compiled after assessing the functional state of the patient, the degree of change as a result of degenerative processes. The complex of procedures traditionally includes drug therapy, physiotherapy sessions, performing therapeutic exercises, massage and manual therapy.

The symptomatic orientation of drug therapy is due to the fact that thoracic chondrosis cannot be completely cured. The main goal of pharmacotherapy is to improve the quality of life of the patient and stop the process of degeneration in the tissues.

To stop the pain, the doctor prescribes non-steroidal anti-inflammatory drugs. Ketoprofen, Diclofenac, Ketorolac cope with inflammation and pain. They can be taken in tablet form or applied directly to a sore spot using a gel or ointment (Nise, Bystrumgel, Voltaren). Another cause of pain in thoracic chondrosis is muscle cramps. Muscle relaxants – Midokalm, Sirdalud – will help get rid of muscle tension. With severe pain that does not decrease under the influence of NSAIDs, a local blockade is performed with analgesics (Novocaine, Lidocaine).

A long course of chondroprotectors will help stop the destructive processes in the tissues. Teraflex, Don, Honda – saturates the cartilage tissue with the missing chondroitin and glucosamine, restoring its elasticity. To improve tissue nutrition, it is useful to conduct vitamin therapy courses, which ensure the normal course of metabolic processes and tissue regeneration.

Physiotherapeutic methods of treatment will help speed up recovery and enhance the therapeutic effect of drugs. Thoracic chondrosis in remission is treated with magnetotherapy, low-frequency currents, laser beams. Each of the methods stimulates blood circulation in the affected area, improves metabolism and tissue regeneration. In addition, the pain is reduced and muscle tone is restored.

The main advantage of physiotherapeutic procedures is local exposure to the damaged area. Unlike drugs, physiotherapy does not adversely affect internal organs and has a small number of contraindications.

It is possible to increase the mobility of the body and ensure a full flow of blood with the regular execution of specially selected exercises with a correctly dosed load. The complex of exercise therapy is prepared by a doctor after a complete examination of the patient. The first sessions are carried out in the presence of an instructor who will verify the correctness of the implementation of therapeutic movements.

All movements should be performed at a slow pace, without sudden movements. Exercise should not be done through pain. If pain occurs, the session should be discontinued and the reaction should be reported to the attending physician, who will carry out load adjustment.

Thoracic chondrosis is a direct indication for a massage course. Contraindication to the procedure is exacerbation, dermatological diseases, thrombophlebitis, heart failure in the stage of decompensation. After the procedure, the condition of the muscle fibers improves at the site of exposure, provides full blood supply, accelerates metabolism, triggering tissue regeneration.

Manual therapy is selected individually, based on the stage of degenerative processes and the appearance of modifications in the structure of the vertebrae. Using special techniques, a chiropractor stretches the spine, unloading it and forcibly increasing the distance between the vertebrae.

Living without pain is the main goal of measures to prevent thoracic chondrosis. Keeping your spine healthy is easy if you follow simple guidelines:

Soreness and discomfort in the chest and shoulder blades are a direct reason to see a doctor. Early diagnosis of thoracic chondrosis will ensure complete restoration of collapsing intervertebral discs. With inaction or an attempt at self-medication, tissue degeneration is accelerated, which leads to irreversible changes that threaten severe complications that threaten the patient’s life.

Pain in the thigh Why does it appear Causes, symptoms, treatment
Is it possible to cure a hernia of the lumbar spine without surgery