To date, the exact cause of the development of osteochondrosis has not been found. Moreover, the disease itself has long ceased to be a problem of the elderly population. The disease can affect any part of the spine, causing burning pain and immobilizing a person. Until the cause of the disease has been proven, the symptoms are the only help in the early diagnosis of the disease and its successful treatment!

Osteochondrosis of the spine is called the process of destruction (damage) of the intervertebral discs, their herniated protrusion, as well as traumatic changes in the surrounding tissues (bone skeleton of the vertebrae, articular cartilage and ligamentous apparatus).

The disease begins to develop at the age of 20, when the vessels of the intervertebral discs (physiologically!) Are obliterated (overgrown). Over time, the core of the disk (its inner elastic part) loses water, becomes flattened and “aging”, which in the future can contribute to the formation of an intervertebral hernia.

How does the disease manifest?

The clinical picture is staged, while determining the severity of the disease. So, for stage I (when the hernia did not form, but only protrusion – bulging – of the intervertebral disc is observed), a local pain syndrome is characteristic (i.e., at the level of the lesion). In response to pain, reflex muscle tension occurs, which limits the mobility of the spine.

For stage II (when a hernia formed and presses on the roots – the nerve processes of the spinal cord), a radicular syndrome, otherwise called “radiculitis,” is characteristic. The latter will be manifested not only by pain (increased, constant, or by the type of “lumbago”), but also by motor / sensitive disorders. The localization and strength of the lesion will correspond to the level of the intervertebral hernia.

A sign of the development of stage III disease is the addition of vascular disorders to neurological ones. At this stage of the disease, muscle weakness, severe sensory disturbances, as well as the irradiation (spread) of pain along the nerves will be observed.

The trophic syndrome will testify to stage IV disease – when a circulatory disorder reaches the spinal cord. The symptoms of hypoxia – a lack of oxygen – the brain and internal organs, will come to the forefront of the ailment.

However, in modern medical practice, it is customary to separate the symptoms of the disease according to the affected spine.

Cervical osteochondrosis and its symptoms

The disease at the level of the cervical vertebrae has four main manifestations:

It is interesting! When the vertebral artery is compressed, the patient develops a variant of osteoarthrosis, which the clinicians have romantically called “Sistine Chapel Syndrome”. It manifests itself in the form of fainting after a sharp tipping of the head. 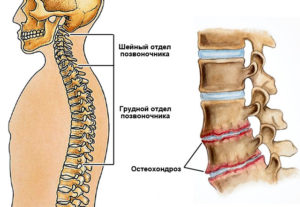 The disease is not common. However, the disease has many “clinical masks” due to which it is rarely diagnosed. Therefore, this pathology was called a “chameleon disease.”

The pain that appears with the disease is sharp and burning (like “chest lumbago”). However, it often mimics other diseases of the organs of the chest and abdominal cavities: heart attack (or angina pectoris), appendicitis, cholecystitis (inflammation of the gallbladder), renal and intestinal colic, gastritis, ulcer, breast disease and even pneumonia.

For these reasons, it is possible to diagnose a disease of the thoracic vertebrae only by using additional examination methods – X-ray (gold standard) or computed tomography.

Symptoms are divided into reflex (“reactive response”) and compression (associated with direct compression of the nerves). The first group includes lumbago (“lumbar pain”) – a sudden burning pain in the lower back after a quick movement; lumbalgia – subacute pains that appear not sharply, but gradually; lumbar ischalgia – more often aching (sometimes shooting) pain that spreads to the buttock or back of the thigh.

Compression syndromes include manifestations associated with compression of the spinal roots – radiculopathy. The latter vary depending on the level of damage: for example, with a violation of 1-3 lumbar vertebrae, pain in the lower back occurs, which spreads to the front and inner thighs; in the marked zone, sensitivity is lost.

With the destruction of the 4th vertebra, the pain “gives” throughout the leg (up to the thumb). In these areas, surface sensitivity is lost, and quadriceps (the extensor muscle of the lower leg) also weakens.

If the affected area corresponds to the 5th lumbar vertebra, then the pain spreads along the outer edge of the thigh to the lower leg and foot; sensitivity is lost, extension of the first finger is difficult. Often it’s hard to stand on your heels with your feet flat.

With the defeat of the 1st coccygeal vertebra, the pain spreads to the buttock, thigh, ankle and little finger. Sensitivity is lost, weakness of the leg muscles appears, walking on toes is difficult.

With compression of the hernia of the cauda equina (the final part of the spinal cord), sexual dysfunctions, urinary and fecal incontinence, muscle weakness, and also thinning and dryness of the skin on the legs occur.

Today, there are about a dozen theories of the occurrence of osteochondrosis: vascular, mechanical, hormonal, hereditary and others. However, so far none have been recognized as leading in the development of this disease.

Based on these data, the only prevention of the disease is a sparing regimen that does not allow overload of the musculoskeletal system. Therefore, it is worth taking care of correct posture at rest and while walking, not to allow sharp bending and twisting of the body, as well as lifting weights.

Be careful! The spine of a person who weighs 70 kg and holds a 15-kilogram load, experiences a load of 200 kg!

Arthrosis of the shoulder joint causes, symptoms, stages and treatment

Treatment of chondrosis of the cervical spine at home