The head of the center is professor, doctor of medical sciences Sampiev Muhammad Tablihanovich

He has been involved in spinal surgery since 1997.

Specialization of spinal deformity and degenerative diseases of the spine.

He completed an internship in Germany, France, the Czech Republic, Holland, Sweden, the USA, and England.

He is the author of 90 publications, 10 copyright certificates and 1 foreign patent, 1 monograph.

Awards: author of a scientific discovery, diploma No. 114

He has been involved in spinal surgery since 1969.

He completed an internship in Germany, France, the Czech Republic, Holland, Sweden, England.

He is the author of more than 200 publications, 10 copyright certificates and 1 foreign patent, 3 monographs, 1 textbook

Awards: Winner of the Calling Award “For the Creation of a New Method of Treatment” 2004

He has been involved in spinal surgery since 2004.

He completed an internship in Germany, France, the Czech Republic, Holland, Sweden, England.

He is the author of more than 50 publications, 1 patent, 4 educational and methodical works.

Scoliosis! This word is very often heard today from the TV screen, read in newspapers and magazines. It causes a feeling of fear and panic if it suddenly sounds next to the name of your child. Often we do not even know for sure what it is. Something, somewhere we heard . But in our eyes we see a “curved body”, a “terrible hump” and as a result a ruined life. What to do? Who to run for help? Unknown in many matters. The desire to help and powerlessness. So what is scoliosis? What to do if such a diagnosis appears in your child’s outpatient card?

Scoliosis is one of the most pressing problems of modern orthopedics (especially for children). Scoliosis as a disease is a complex deformation of the spine, characterized by its curvature in three planes.

Complicated three-dimensional deformation of the spine leads to deformation of the ribs and rib cage as a whole, a change in its shape (the formation of a rib hump), and a disruption in the normal positioning of the chest organs and systems of the human body. In patients with scoliosis, physical inferiority develops, deep mental suffering occurs due to large cosmetic defects.

Thus, scoliosis is not just deformation of a single segment of the human body, it is a disease that affects and leads to disorders in several systems (musculoskeletal, respiratory, cardiovascular, nervous). Curvature of the spine in this case is the leading and primary manifestation of the disease, but not the only one! Based on this, it is important to understand that the treatment started on time will help to prevent the development of not only severe deformation of the spine and chest, but also changes in the respiratory, cardiovascular and nervous systems.

The causes of the disease are unknown. For centuries, doctors and scientists have been trying to figure out and understand the causes of idiopathic (causeless) scoliosis. Many assumptions were made, many theories were developed, but so far none of them has found 100% confirmation. Today we can assume that several processes are at the heart of the disease:

Changes in the connective tissue and bone structures of the spine.

Unfortunately, in 80% of patients who contact us, the cause of scoliosis cannot be determined. This scoliosis is called idiopathic scoliosis (idiopathic scoliosis). One thing is obvious: the theories of “rickety” and “school” scoliosis, which existed for a long time, have completely remained in the history. There is no connection with rickets, no connection with landing at a school desk. The latter is especially important to emphasize, since teachers and parents of patients are still often inclined to explain the development of the disease precisely by “wrong” sitting at their desk.

Does age and gender affect the development of scoliosis?

Scoliosis can occur at almost any age, but most often it occurs during puberty – at the age of 12-14 years, and girls a little earlier. In general, in 80% of cases, girls suffer from scoliosis.

It is customary to divide scoliosis depending on the age at which it appeared at (E.V. Ulrich, A.Yu. Mushkin, 2004):

Scoliosis of young children: develop in the first 2 years of life, are more often observed in boys, in most cases they regress.

Juvenile scoliosis: develops between the 3rd year of life and the onset of the puberty, is more often observed in girls, more often progresses.

Adolescent scoliosis: the onset of development coincides with puberty and continues until bone growth is completed (18-20 years). In the vast majority of cases (up to 85%) are observed in girls, progressing.

Adult scoliosis: develops after completion of bone growth (after 18 years).

Scoliosis is easy enough to diagnose. Already in the appearance of the patient and the questioning of the parents, an experienced doctor will be able to make a diagnosis and determine the degree of deformation. An accurate diagnosis is established only after an X-ray examination of the spine.

The main signs by which you can suspect scoliosis: 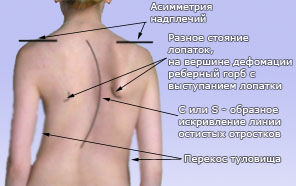 Shoulder asymmetry – when one shoulder is higher than the other

The main symptom is a change in the line of the spinous processes, which passes from a straight line either to C or to a figurative scoliotic arch.

Torso skew – scoliosis leads to a change in the balance of the body when, as shown in the figures, the torso axis tilts toward the top of the deformation.

When leaning forward (Adams test), it is possible to more accurately trace the deformation of the spine, as well as measure the value of the rib hump.

We have listed only the most basic signs of scoliosis, which can be detected without special equipment. In the clinic, the patient’s study includes a comprehensive clinical examination of the patient, a mandatory X-ray examination of the spine, CT or MRI according to indications and specialist advice to resolve the degree of changes in other organs and systems.

Scoliosis almost always progresses. The doctor always wants to know exactly what the speed of this progress will be. But, the fact is that there are no absolutely reliable signs of progression of scoliotic deformation. There are only indirect indications of a relatively greater or lesser likelihood of an increase in the curvature, and they need to be evaluated only in combination.

At the moment, the doctor first of all evaluates the following parameters:

the degree of completion of skeletal growth (Risser’s test)

the presence of other diseases, especially the nervous or hormonal systems

Looking ahead, it is necessary to warn that the presence of a small degree of deformation with its steady progression is today a DIRECT INDICATION TO SURGICAL CORRECTION OF SCOLIOSIS.

According to world studies, to date, none of the methods of conservative therapy (massage, exercise therapy, manual therapy, wearing a corset, muscle electrical stimulation, etc.) can not be a means of treatment and correction of scoliosis.

Surgical treatment of children with progressive scoliosis under the age of 10 years is an extremely complex global problem of spinal surgery. at this age, spinal structures are not fully formed and spinal growth is not complete. In this connection, the use of the technique of operations as in adults or adolescents leads to a limitation of spinal growth.

In the treatment of scoliosis in children, several treatment regimens have been adopted.

(often used in America and Europe). Stage surgical treatment – surgical correction is performed by the structure, then this structure is extended every 1-2 years, up to 14-15 years, and then the stable structure is installed.

Simultaneous correction using a stable design (currently not recommended). Performing an operation immediately with the installation of a stable structure is fraught with a serious complication – “crankshaft syndrome” when scoliosis continues to progress from the already installed structures on the spine.

Expectant tactics (often found in Russia) – a child is observed, conservative treatment is performed until the age of 16-17 years (completion of spinal growth) and then surgery is performed using a static design

The use of expectant tactics leads to the formation of severe scoliosis by 16-17 years, which is very difficult to correct. Also, changes are formed from the side of the heart and lungs. Often patients are treated with such a severe form of scoliosis in which it is impossible to perform an operation.

A 15-year-old patient with the following medical history was operated on at our Center:

Hernia under the knee