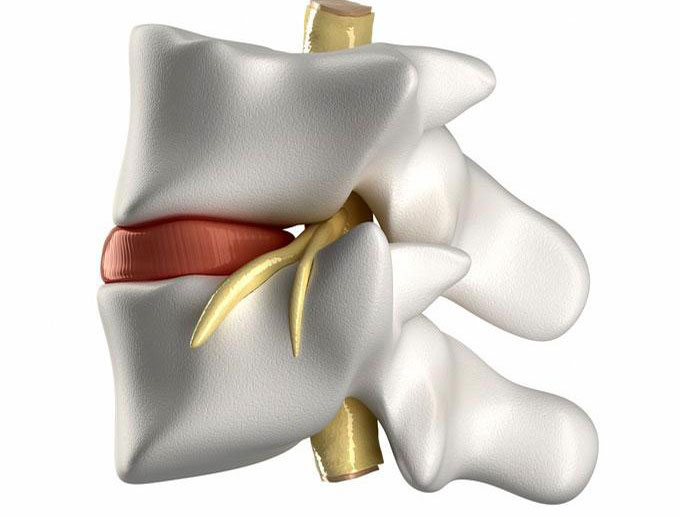 Schmorl’s hernia is a type of intervertebral hernia that has a vertical direction, and protrudes inside the vertebral body. Deformation is formed from childhood, transmitted by inheritance. It may not bother the patient for years, but there is a risk of complications in the form of a compression fracture, a classical (horizontal) hernia, and curvature of the spine. The treatment is based on nutrition adjustment, exercise therapy, massage and physiotherapy. 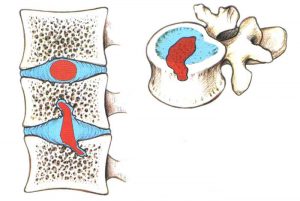 Schmorl’s hernia (Schmorl’s nodule) is a hernia that penetrates the cavity of the upper or lower vertebra. According to the anatomical structure, between the two vertebrae there is a cartilaginous disc, which is designed to mitigate tremors during movement.

The disk consists of elastic cartilage tissue, which is particularly dense at the edges of the disk. Such a structure is necessary in order to “hold” the jelly-like core, due to which the amortization ability is realized. If, under the influence of provocative factors, the structure of the cartilage changes and becomes weak, the core of the disk “goes out” and forms a cartilaginous node.

To form a vertical hernia, two mandatory conditions must be present. One of them is a weak cartilaginous membrane, which in this case is manifested in defects in the locking plate at the junction with the vertebrae. The second condition is the formation of voids in the bone tissue on the lower or upper part of the vertebra. If two factors are present, the cartilage tissue fills the space in the bone and forms a nodule, which is named after the German scientist who first described the disease.

Schmorl’s hernia is diagnosed at any age, but more often it is found in children. This is due to a large percentage of the genetic etiology of this disease, as well as to the disproportionate growth of the tissues of the spinal column.

The main causes of vertical hernia:

In young children, Schmorl nodules may form due to a genetic predisposition. The disease can be transmitted from generation to generation and have a multiple character, affecting several vertebrae. This phenomenon is explained by the weakness of the cartilage tissue, which is hereditary.

The period of active growth of the child is associated with different rates of division of bone and cartilage cells. Usually the bone tissue “lags behind” and does not have time to grow in the enlarging vertebrae, due to which a cavity is formed. The void is filled with a cartilaginous formation and Schmorl’s hernia forms. Not every child can start a pathological process. The presence of a locking plate defect at the genetic level or of an acquired nature is an important condition for the appearance of the disease.

In adults, the disease is more often formed in the lumbar spine. Initial deformation of the vertebra provokes a rise in gravity or mechanical damage. In addition, the cause may be a decrease in bone density after metabolic and inflammatory diseases.

Schmorl nodule can form with the following diseases:

In adolescence, Schmorl’s hernia can appear as a result of a rapid increase in muscle tissue, which contributes to high compression on slowly developing vertebrae. This condition is called acceleration in medicine. 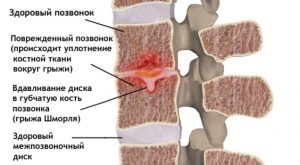 In most cases, a vertical hernia is detected by chance. The asymptomatic course of pathology prevents early diagnosis. The absence of pronounced clinical signs is explained by the location of the hernia, which does not exert pressure on the spinal roots and does not provoke a decrease in the lumen of the spinal canal.

A feeling of increased fatigue and unpleasant discomfort may be a manifestation of the accumulation of several small Schmorl nodules in a small area. Some people have moderate soreness while standing up for a long time. A distinctive feature of pain with vertical hernia is its complete cessation after taking a horizontal position.

The vertebrae of the thoracic spine are often deformed by Schmorl nodules. Most often, this localization is diagnosed in adolescence. The main manifestations include curvature of the spine (thoracic kyphosis, scoliosis). Symptoms are absent, only sometimes the patient can feel severe fatigue in the upper back.

One of the favorite locations of the acquired pathology. Schmorl’s hernia of the lumbar vertebrae is a common occurrence. The loin takes up the main load when lifting weights or performing heavy physical work.

In the upper spine, hernias are extremely rare. Most often, small single nodes are diagnosed. When a defect appears in a person, headaches, sometimes dizziness, can disturb. With multiple lesions, sleep disturbance may join.

Patients rarely see a doctor with a suspected Schmorl hernia. In most cases, the cartilaginous nodes do not manifest themselves in any way, and a person often learns about the presence of a defect in the spine after examination for another disease. A vertebrologist or orthopedist is involved in the identification of pathology. During the collection of an anamnesis, the specialist finds out the presence of spinal injuries, whether there were cases of vertical hernia in the patient’s relatives.

During a visual examination, curvature of the spine or impaired posture is taken into account. For hardware research, radiography is prescribed. In the pictures, herniform formations are clearly visible, in addition, the method allows to identify concomitant diseases of the spinal column. The detection of spondylarthrosis, osteoporosis, osteopenia requires the inclusion of additional treatment in general therapy.

If the patient complains of pain or other signs that are not typical for the disease, an additional magnetic resonance imaging is performed to detect cartilage dystrophy. The latent course of the disease, when measures are not taken to treat and prevent deterioration, leads to the formation of secondary diseases.

The development of an additional disease leads to the appearance of symptoms characteristic of a complicated condition. The appeared pain, a change in the shape of the spinal column, a violation of sensitivity and numbness of the skin leads the patient to an orthopedist. Often during the examination, the doctor identifies the root cause of the pathology, which is Schmorl’s hernia. 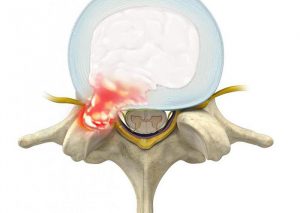 Harmless at first glance, cartilage masses can cause serious complications. Therefore, their treatment should be carried out in order to strengthen bone tissue and normalize metabolic processes. Small hernias are not particularly dangerous and do not need specific treatment. An exception are multiple lesions of one vertebra.

Large formations that can weaken the vertebra and lead to a violation of its integrity (fracture) require careful attention. To normalize bone mineral density, it is recommended to adhere to a specific diet. The inclusion of cheese, cottage cheese, dairy products can make up for the lack of calcium. With large losses, the trace element is prescribed in the form of medicines – Calcium-D3 Nycomed, Calcium-Sandoz forte, Calcemin.

The prescription of drugs by a doctor is based on age and general condition. For children under 18 years of age, drug treatment is not practiced. It is believed that with age, the disease can go away by itself. The reason for the use of drugs in adult patients is pain.

To eliminate unpleasant pain are prescribed:

Simultaneously with NSAIDs, a course of injection therapy with B vitamins is recommended – Milgamma, Combilipen. Drugs improve innervation in the affected area. To restore the structure of cartilage, chondroprotectors are taken for a long time. Teraflex, Arthra, containing glucosamine and chondroitin, stop dystrophy and gradually start regeneration processes.

Physiotherapeutic treatment is effective for restoring mobility and blood circulation in the spine. With Schmorl’s hernia, magnetotherapy is effective, exposure to laser beams and ultrasonic waves. Medicinal electrophoresis with steroid hormones (Hydrocortisone) can be taken in the acute phase, if necessary, local anesthetic and anti-inflammatory effect.

A course of therapeutic massage will help normalize microcirculation and muscle tone. The session should be performed by an experienced specialist who owns special equipment. During massage exposure, it is necessary to avoid the localization zone of the cartilaginous nodules, so as not to provoke damage in the weakened area.

The possibility of physical therapy is determined by the attending physician. In the absence of contraindications, it constitutes an individual set of exercises aimed at maintaining back mobility and strengthening muscles. Classes are held regularly, the duration should not exceed 30 minutes. The movements should be smooth, without pain. It is additionally recommended to engage in swimming, Nordic walking.

As part of the additional treatment, reflexology is used. The disease does not progress when exposed to active biological points on the human body. This is due to improved hemodynamics, trophism of spinal tissues, normalization of metabolism at the cellular level, as a result of which bone tissue is strengthened.

The course of hirudotherapy (the use of medical leeches) improves the condition of paravertebral tissues. After a full course, muscle spasm is relieved, blood flow normalizes, blood pressure decreases, tissue nutrition improves.

Schmorl’s hernia is a pathological condition that is impossible to prevent. Preventive measures may include the organization of proper nutrition, the intake of an adequate amount of calcium. If relatives had cases of Schmorl nodules, it is recommended to regularly conduct preventive examinations, exclude heavy physical exertion, active sports.

After spinal injuries, with poor posture, unpleasant soreness or fatigue, consult a doctor to exclude a latent disease. If a disease is detected, follow the recommendations and prescriptions of the doctor exactly.

Exercises for the treatment of osteochondrosis of the thoracic spine

How to treat coxarthrosis of the hip joint