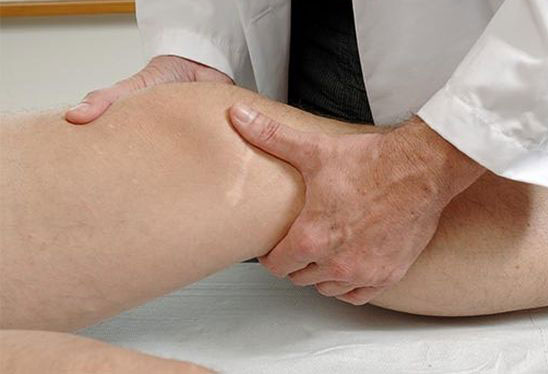 The main reason for the inability to walk normally is the degeneration of articular tissues. Bilateral gonarthrosis is a chronic destructive disease of a non-inflammatory nature, resulting in the destruction of cartilage and deformation of bone tissue. The disease can develop after an injury, infection, a heavy load, or due to old age. Pathology is detected after radiography and MRI. The treatment is conservative or surgical, the method is determined by the severity of degeneration.

Description of the disease

A progressive pathology based on dystrophic thinning and destruction of cartilage in the knee joint is called arthrosis. Bilateral gonarthrosis (arthrosis) is a symmetric lesion of two joints simultaneously. Moreover, it is noted that the destructive process in the joints proceeds with a different degree of damage.

Bilateral gonarthrosis of the knee joint develops gradually, can occur for years, slowly worsening the patient’s condition. At the initial stage, the changes are so small that the disease does not reveal itself due to the lack of symptoms. The first damage is cartilage tissue, which covers the articular ends of the bones.

Impaired metabolism in the joint tissue contributes to the appearance of microcracks on the surface of the connective tissue. A lack of hyaluronic acid leads to a loss of firmness and elasticity of the cartilage. Gradually, the cartilage protection becomes thinner and exposes the bone tissue. The level of synovial fluid is significantly reduced, which negatively affects the nutrition and gas exchange at the cellular level.

After narrowing of the joint gap on the surface of the head of the bone, a dense layer of mutated cells grows. Over time, bone tissue randomly grows and forms beak-like growths – osteophytes. Trying to adapt to changes, the joint is gradually deformed.

Bilateral gonarthrosis is dangerous in that both knees are affected. With unilateral arthrosis, a healthy knee joint takes a load on itself, which slows down the flow in another joint. With a simultaneous defeat, pathological processes are accelerated, which threatens an immediate loss of the ability to move around without assistance. According to statistics, tissue degeneration of both knees often leads to disability.

The disease begins to develop at the age of over forty. This age stage gives rise to involutive (reverse) processes in the joints. Gonarthrosis is also detected at a younger age if a person exposes his knees to regular intense exertion.

Due to origin, the following types of arthrosis of the knee joint are distinguished:

In orthopedic practice, the course of bilateral gonarthrosis is conditionally divided into three stages:

Every day, most of the load falls on your knees. Over time, the joint loses its ability to self-renew and undergoes deformation. The impetus for the early development of the disease can be mechanical damage or concomitant pathologies.

Symptoms of bilateral gonarthrosis does not appear immediately. The beginning of the destructive process proceeds without external signs. Of the possible manifestations, slight pain can be noted, which often worries if necessary to transfer body weight, maximally loading one limb, moving along the steps. Such pain is fleeting and quickly disappears after a short rest.

The movements in the joint acquire some stiffness and pulling sensation under the knee. With the progression of the pathology, pain becomes the main symptom of the degenerative process. Each movement, even without a noticeable load, is accompanied by a painful reaction of a moderate nature. Long walking or intense running intensifies the pain syndrome, which passes in a calm state.

At the second stage of development, bilateral gonarthrosis may be accompanied by slight swelling of one or both joints. When you try to move the patella to the side, distinct crepitus is heard, and the flexion movements in the joint are accompanied by a crunch. As the pathology progresses, the pain becomes chronic and accompanies the patient not only during physical activity, but also in a state of complete rest.

It is no exception at night, when during sleep, pain in the knees causes insomnia. When you try to bend your leg appears sharp pain. At the terminal stage, the limited movement reaches its maximum. The range of motion is absent not only during bending, it is also impossible to straighten the leg completely.

A patient with bilateral knee gonarthrosis develops contracture in both joints, but with a different degree of severity. Independent movement becomes impossible, a person walks, leaning on a cane or crutches, in severe cases with the help of walkers. At this stage, the joint takes an irregular shape and enlarges. In some cases, deformation leads to a change in the shape of the legs, which resemble the letter “O” with varus and the letter “X” with valgus deformity of the feet.

Untimely detection of a disease or attempts to treat degeneration on their own using advertised means without the participation of qualified specialists, in most cases lead to the addition of secondary diseases.

The disease can be complicated by the following pathological conditions:

The greatest danger in degenerative-dystrophic disease is untimely diagnosis, which increases the risk of possible complications. At the initial stage, when complete restoration of the joint structures is possible, the early detection of bilateral gonarthrosis is difficult due to the absence of symptoms. Pathology can be diagnosed by chance during an examination for other diseases.

More often the patient goes to the doctor with the appearance of severe pain, which occurs during persistent irreversible changes and progressive deformation. At the appointment, the doctor, more often it is an orthopedist, examines and palpates (palpates) the sore knees. Based on complaints and clinical symptoms, a preliminary diagnosis is made, and an objective examination is prescribed.

Laboratory testing of urine and blood is carried out in order to assess the general condition, >

Therapeutic measures for bilateral gonarthrosis is recommended to start as early as possible. The complex of procedures traditionally includes drug therapy of a symptomatic and restorative nature, physiotherapeutic procedures in the stage of stable remission, a course of massage and physiotherapy exercises, which is a fundamental method for developing joints.

Patients are advised to relieve sore joints. Limiting the load will protect the knees from further destruction. For this, it is necessary to alternate the load in the form of special exercises with rest, walk with support on a cane, and with severe pain put on an orthopedic bandage on the knee joint (knee pad).

Shoes for everyday wear should be comfortable, it is recommended to insert shock-absorbing insoles into it, which will provide additional protection to the knees at the time of movement. Insoles are selected individually for each patient. For older patients, soft orthopedic inserts in shoes are recommended, since in old age, after a specific test, static flat feet (ossification of the foot) is found.

Progressive bilateral gonarthrosis cannot be completely cured. With the help of drugs, it is possible to stop the course of the disease and take maximum measures to restore cartilage.

In the stage of improvement (remission), the doctor, after assessing the condition of the knee joints and taking into account concomitant diseases, prescribes physiotherapeutic procedures. An exception is drug electrophoresis, with which the disease is treated in the acute period. As a basis for severe pain, an analgesic Lidocaine or steroid hormones – Hydrocortisone, Diprospan are used.

Therapeutic load during the implementation of the physiotherapy exercises complex is the main way to achieve restoration of movements in the knee joint. A set of exercises is compiled by the doctor individually for each patient. At the first stage, the patient is trained in the technique of performing exercises, which is carried out under the supervision of an instructor in exercise therapy.

The main task of the specialist is to teach the patient to dose the load correctly, so as not to provoke an exacerbation and to nullify the previously performed treatment. All exercises should be performed at a slow pace, without sudden movements. The multiplicity of the movements recommended by the physiotherapist must be strictly observed.

Exercises cannot be performed through pain, when a pain reaction occurs, the exercise therapy session is stopped, which is additionally reported to the attending physician, who will adjust further classes. The success of therapeutic exercises in the regularity of its implementation. If there are no special medical instructions, exercise therapy is carried out daily for 10-15 minutes 1-2 times a day.

To reduce the risk of developing bilateral gonarthrosis, it is enough to fulfill the following recommendations, which are recommended to be started from a young age:

If crunch appears on the background of pain in the joints, seek medical advice. This must be done as early as possible so as not to start the disease and maintain healthy joints for many years.

Treatment of abdominal hernia without surgery