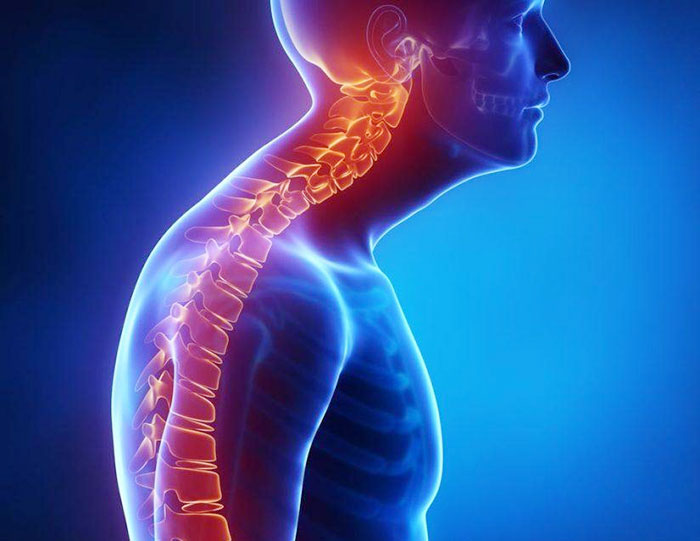 Ankylosing spondylitis is a rare and incurable pathology that manifests itself in pain and curvature of the spinal column. The true cause of the disease is still unknown, which greatly complicates the correction of the disease. So, modern therapy includes non-specific effects in the form of anti-inflammatory and corticosteroid agents. At the same time, therapeutic measures are supplemented by physiotherapy and a special set of exercises aimed at maintaining spinal mobility. 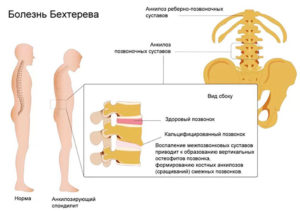 What kind of disease?

Ankylosing spondylitis is associated with the appearance of an inflammatory reaction in the intervertebral discs, bones, articular membranes, as well as in the places of attachment of the tendon and ligamentous apparatus. As a result, the joints gradually lose their mobility up to their complete fusion – ankylosis.

In Russia, ankylosing spondylitis is considered a relatively rare disease (3 cases per 10 thousand people). However, the danger of pathology is the emergence at a young age (15-35 years) and rapid disability of patients, which makes the disease a significant social problem.

Why does ankylosing spondylitis appear?

Today, the exact cause of ankylosing spondylitis is not known. It is believed that disruptions in the functioning of the immune system provoke the disease when the body perceives its own structures as something foreign.

This usually manifests itself in the form of aggression of defense cells (lymphocytes) against joint tissues. In other words, the body “attacks” its own parts, because considers them potentially dangerous. The result is an inflammatory reaction in which all joint structures are involved. The latter are normally elastic, but in the process of inflammation and destruction are replaced by dense (scar) tissue, which limits the mobility of the joints.

To provoke such malfunctions in the immune system can:

In clinical practice, there are five options for the course of ankylosing spondylitis:

One of the options for the manifestation (onset) of ankylosing spondylitis is a septic-like form that resembles a systemic inflammatory reaction – sepsis.

Read the article:  Arthrosis of the knee joint treatment symptoms

Ankylosing spondylitis fever usually manifests itself with fever up to 39-40 ° C, sweating, pain in joints and muscles, as well as severe dehydration and weight loss. 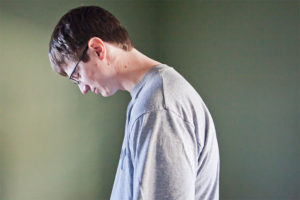 The clinical manifestations of ankylosing spondylitis are divided into early and late.

The first manifestations of ankylosing spondylitis are lower back pain that appears at night and disappears during the day. Soreness is often observed in the buttocks and extends to the posterior region.

The lumbar spine is usually constrained in the morning, and range of motion is restored in the evening after physical activity or a warm bath. At the same time, the back muscles are often tense, due to which the lumbar flexure, lordosis, is smoothed.

If ankylosing spondylitis is observed in the rib-vertebral joints, patients complain of girdle pain that spreads through the intercostal space and worsens with hiccups, coughing or sneezing.

In a third of cases, the disease is accompanied by inflammation of the iris and ciliary body (iridocyclitis). Often manifested by bilateral redness of the eyes, soreness, sensation of a “foreign body”, lacrimation, decreased clarity of vision and increased sensitivity to light.

A detailed clinical picture of the late stages of ankylosing spondylitis is characterized by diffuse pain, covering all parts of the spinal column. As a rule, the spine bends with the formation of a characteristic “flexion” in the thoracic region – kyphosis (hump).

Such a deformation of the spinal column shifts the center of gravity, due to which the patient is forced to bend his knees – the so-called “supplicant pose” is formed.

The muscular frame of the back atrophies, the spine partially or completely loses mobility: flexion and extension, as well as rotation by the body are impossible. At the same time, impaired motor activity also affects the chest, which often leads to respiratory disorders.

In 25% of cases, the femoral and shoulder joints are affected, in 10% of the joints of the hands and feet. Ankylosing spondylitis often proceeds as one-sided mono or oligoarthritis (involving one or two or three joints, respectively). In this case, inflammation of the peripheral joints is mainly observed in patients of puberty and young ages (15-25 years).

The late stages of ankylosing spondylitis are usually accompanied by inflammation of the aorta and the membranes of the heart, which often leads to insufficiency of the valve apparatus, as well as to cardiac disturbances (rhythm, conduction, etc.).

The lungs may be involved in the pathological process: there is a decrease in the airiness of the lung tissue due to the proliferation of connective tissue cords – fibrosis. In rare cases, the kidneys are affected, which is associated with the deposition of a modified protein in them – amyloid. Such changes over a long period are asymptomatic, after which respiratory disorders (shortness of breath, etc.), swelling on the face and legs, as well as increased blood pressure can occur.

Ankylosing spondylitis is diagnosed on the basis of:

Read the article:  Osteophytes of the cervical spine treatment

* Pain in the spine, which occurred up to 40 years, developing gradually (more than 3 months), associated with morning stiffness and disappearing after physical activity, is considered inflammatory. 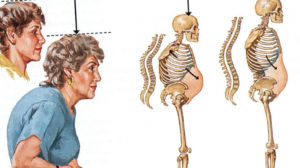 The goal of therapy for ankylosing spondylitis is to reduce pain, as well as maintaining the mobility of the spinal column.

Anti-inflammatory drugs are prescribed as painkillers for Ankylosing spondylitis: Indomethacin, Aceclofenac, Meloxicam in maximum daily dosages, your doctor should prescribe the drugs. If the pain syndrome interferes with night sleep, the additional use of antidepressants (amitriptyline) is recommended.

In the presence of inflammation of the joints of the limbs, local administration of corticosteroids is used. Systemically, glucocorticoids (Methylprednisolone) are prescribed only for intolerance to other anti-inflammatory drugs.

Sulfasalazine, methotrexate and etanercept and infliximab can be used to modify the immune response.

Patients with ankylosing spondylitis are shown daily gymnastics performed once or twice a day for half an hour. Exercises, as a rule, combine respiratory movements and amplitude, aimed at maintaining the mobility of the spine. The emphasis is on extension of the spinal column and strengthening of the back muscles.

To prevent the development of the disease, it is recommended to sleep on a hard surface without a pillow. Physiotherapeutic procedures are also prescribed: magnetic exposure, reflexology, radon and nitrogen baths.

Surgical treatment of ankylosing spondylitis consists in endoprosthetics of the hip joint (with severe impairment of joint function) and excision of the synovial knee capsule (with persistent synovitis of the knee joint).

Secondary prevention boils down to slowing the progression of pathology through adequate treatment and special gymnastics.

Remember, Ankylosing spondylitis is incurable, and its therapy is aimed at improving the standard of living of patients in order to prevent early disability!