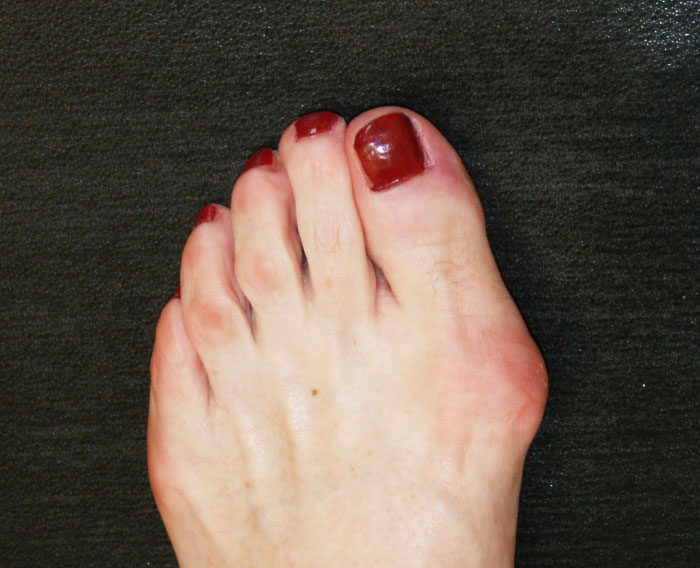 The growing “bump” on the leg brings a lot of inconvenience and anxiety. An unpleasant cosmetic defect, when a bone grows on the foot of the big toe, causes difficulties with the selection of shoes, periodic pain in the deformed joint, rubbing on the fingers. The reasons for the appearance of bone growth include flat feet, articular pathologies, weakness of connective tissue. A protrusion of the first metatarsophalangeal joint refers to irreversible changes in which conservative treatment only stops progression. You can restore the former beauty to the foot with the help of surgical excision of bone tissue. 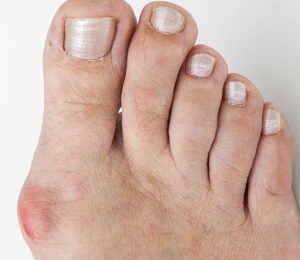 Anatomical features of the foot

A quarter of all bones of the human skeleton are concentrated in the feet. The distal region of the lower extremities consists of fifty-two bones that form the tarsus, metatarsus and phalanges of the fingers. The foot is a movable shock-absorbing structure, thanks to numerous joints and ligaments.

The bone structure forms two longitudinal and one transverse arch, which have the ability to bend and return to their original state. The elastic structure gives the foot a spring function, protecting the spine and joints of the lower extremities from tremors while walking. Weakening and bending of the arches leads to the development of flat feet, which can lead to deformation changes in the joints of the foot.

Hallux valgus is the process when a bone grows on the foot near the big toe. Bone proliferation is a complication of the prolapse of the transverse arch, which is located in the forefoot in the area of ​​the five metatarsal bones.

The thumb is the largest, it is located separately from other fingers, with a slight offset to the side. Normally, the finger is straight, its phalanges are in the same plane. As a result of transverse flatfoot, the finger deviates outward, and the head of the first metatarsal bone forms a small tubercle, which begins to increase from time to time. The result of hallux valgus is destructive changes in the joint, which lead to cartilage dystrophy and bone proliferation.

Why does a bone grow

Hallux valgus often affects the female population of the planet. This fact is associated with the weakness of the ligamentous apparatus, which under the influence of provoking factors leads to the development of transverse flatfoot. Hormonal changes in the body, the effect of relaxin during pregnancy, addiction to high heels are the main causes of impaired biomechanics of the forefoot.

A genetic predisposition, during bone growth on the foot near the thumb, can be observed in different generations. Pathology is provoked by the features of the anatomical structure, when the metatarsal phalanx has an elongated shape. Increased body weight creates a large load on the foot, causing the arches to bend.

Bone protrusion is constantly injured during friction of the bone surface with shoes, which leads to the development of bursitis. The inflammatory process appears due to tissue damage, leading to degenerative changes that cause deformation at the level of the medial metatarsophalangeal joint.

Metabolism is another cause of bone growth. Osteoporosis with a decrease in bone density leads to deformations not only of the foot, but also of the spine.

Increased synthesis of uric acid causes gout, the main symptom of which is the deposition of urates in the form of crystalline powder in the cavity of the joint bag. This pathology has a distinctive feature – periodically appearing pain attacks in the enlarged joint. 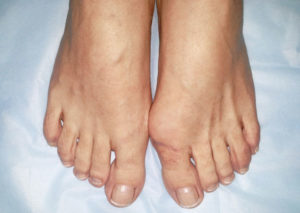 The pathological condition with the growth of the bone on the leg develops gradually. At the initial stage, the appearing “bump” looks like a small increase that does not cause discomfort other than appearance. The only thing that accompanies Hallux valgus in the first stage is the flattening of the forefoot, indicating progressive flat feet in the transverse projection.

After some time, the “bump” increases, and the thumb deviates toward the second finger. Changes occur against the background of the appearing soreness and tiredness of the legs after a long walk.

If therapeutic measures are not taken, the deformation becomes significant:

There are four stages of hallux valgus:

Pronounced bone growth is subjected to regular rubbing in shoes, not only in the area of ​​the protruding bone, but also between the touching fingers.

Frequent trauma can cause an inflammatory process (bursitis) with the development of characteristic symptoms:

A similar clinical picture develops with gout. The main difference is the nature of the pain, which is comparable to the impulses of the electric current that pierces the joint. A gouty attack occurs mainly at night, lasting from a couple of hours to several days.

It is not difficult to make a diagnosis of Hallux valgus, with a visual examination, the external changes of the thumb, and the entire foot as a whole, are clearly visible. It is important to accurately determine the cause of deformation to stop the pathological process and get rid of an unpleasant symptom.

Preliminary diagnostics of orthopedists is carried out on a plantograph. As a result of the study of foot prints, the doctor first determines the stage and type of flat feet. A more detailed study is carried out using an x-ray.

The presence of signs of inflammation will require an assessment of the general condition and determination of the pathogen. Using the results of a general analysis of blood and urine, inflammation is revealed, metabolic disturbance: an increased content of uric acid, indicating gout. To determine the microorganism, as the cause of inflammation, a synovial fluid is taken during a diagnostic puncture of a deformed joint.

Based on the above measures, a diagnosis is established for the effective treatment of the condition. 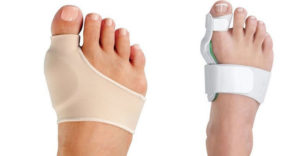 Hallux valgus is treated using the symptomatic and surgical method of treatment. The conservative method does not get rid of visible manifestations, but stops the further development of pathology. Elimination of symptoms and correction of the foot using medical devices allows you to maintain the condition of the metatarsophalangeal joint at the same level.

Surgical treatment eliminates the defect and restores the foot to its previous appearance. In humans, the need for specialized shoes, silicone correctors for separating toes disappears. There is an opportunity to wear open shoes and not be shy about disfigured legs.

Treatment without surgery is primarily symptomatic. When pain appears, the orthopedist prescribes analgesics (Analgin, Baralgin) or non-steroidal anti-inflammatory drugs (Ketoprofen, Diclofenac) to eliminate the pain syndrome. Medications are used not only in the form of tablets, with local exposure to ointments or gels (Bystrumgel, Nise, Dolobene), the therapeutic effect is enhanced.

A history of gouty seizures will require the administration of Colchicine in the first hours after severe pain, or Indomethacin, which is used for intolerance to the first drug. In the presence of an infectious factor, treatment is supplemented with antibiotics (Azithromycin Cephalexin). If the above measures are ineffective, glucocorticosteroids (Prednisolone, Hydrocortisone) are injected into the affected joint to combat inflammation and edema.

Correction of the foot with orthopedic products

It is possible to stop the process of bone growth near the thumb, only with the constant use of orthopedic insoles. The main cause of pathology (flat feet) is treated with correction of the arch of the foot with medical products. The insole was designed to support the foot in settled places, returning physiological bends to it, and unload the foot, taking the bulk of the load on itself.

The doctor deals with the selection of the right insole after a detailed examination of the human foot. Given the degree and shape of flat feet, an orthopedic product is recommended, which will not only stop the growth of the “bump”, but also relieve pain and fatigue during movement.

Modern orthopedic companies offer a wide selection of insoles. For transverse flatfoot, a pronounced metatarsal cushion should be present on the insole, which supports the transverse arch of the foot. Considering the type of flat feet (static or dynamic), you can choose soft (ORTO Mix, Trives ST-111) or hard (ORTO Concept, Trives ST-105k) insoles depending on the material of which the orthopedic construction is made.

To prevent the surface of the bone from rubbing in the shoes, silicone dividers for the toes or bursoprotectors that protect the growth from the outside are used. To return the finger to its physiological state, at rest (during sleep or rest), a special orthosis is put on, which moves the finger away and fixes it in the correct position. Contraindication for this method of treatment is pain when moving the finger with static flat feet, when ossification of the joints of the foot appears.

Walking on the orthopedic rug with bare feet, rolling the foot of a bottle or massage roller will help improve the condition of the feet.

Surgical treatment consists in removing the growth on the thumb. Excision is performed through a small incision in the area of ​​the “bump”, if necessary, surgeons reconstruct the thumb and metatarsal bone.

Rehabilitation after surgery takes about two months. All this time, the operated leg should be in a special bandage or shoes with stiff soles. A month and a half after the operation, the doctor prescribes orthopedic insoles, which will have to be worn daily so that the state of the bone on the leg does not return.

It is important to take care in advance when preventing hallux valgus deformity of the big toe when the legs have no signs of bone changes: